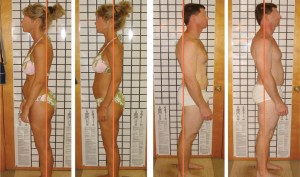 When you think about your body, do the thoughts that come to mind inspire emotions of wonder and awe at the miracle of it all? Do you ever ask yourself, how does this organic soup of complex systems that we call a body, navigate our way on this planet we call earth? How does my heart beat, how do my lungs breathe, or my eyes see? How do the fingers on my hand know the difference between rough and smooth surfaces? How does my brain judge the weight of an object as too heavy for me to lift safely? Or do your thoughts trigger feelings of disappointment in the performance of your body or resentment at the aging process? How often do we blame a part of our body for not being up to standard, or speak poorly of it like a disowned relative “it’s that bum knee’s fault” or “if it weren’t for that bad shoulder” as if it belonged to someone else and we had no responsibility in the creation of our condition.

Pain is a Warning Signal
I have some good news. It is not too late to become friends again with our bodies. This relationship can be saved! One of the keys to a successful relationship is awareness of the needs of our partner. For our two legged upright structures to work efficiently in a world where gravity is a constant companion, postural alignment and movement awareness are key components in physical health. A common mistake most of us make is misperceiving the symptom of our pain as the cause of the pain. Pain is a warning signal, the “fire alarm” if you will, that something is wrong and needs attention. In reference to true soft tissue structural pain, the sound or location of the fire alarm is most often not the source of the fire.

What is Head Forward Posture?
Often we experience neck and upper back pain; if only we could get those muscles to relax we believe we wouldn’t have “those” headaches or “that” shoulder pain. The man and woman pictured to the right suffered from this type of chronic head, neck and shoulder pain. We will call them Harry and Sally. What Harry and Sally didn’t know is the culprit (the sound of the alarm) is usually not primarily caused by the tightness of the neck, shoulder or back muscles but rather something known as Head Forward Posture (HFP). The two sets of “before“ photos seen below are classic examples of HFP. In optimal alignment, the head should stack above the shoulder, the shoulder then sits on top of the rib cage, the rib cage over the pelvis, pelvis over knees, and knees over ankles. This is an issue of alignment and soft tissue torsion.

The Average Head Weighs 10-12 Pounds Properly Aligned
As we can see in the first set of photos of both Harry and Sally, the ear and shoulder are clearly in front of the plumb line. The average head weighs between 10-12 pounds, the weight of a bowling ball. For every inch the head moves forward off of optimal alignment, it increases the weight of the head on the neck and shoulders by approximately ten pounds. Following this logic in the Before, figure 1, Harry is carrying around the equivalent of 36 pounds or THREE bowling balls, and in Before, figure 2, Sally is carrying about 20 pounds or TWO bowling balls. No wonder their neck and shoulders hurt! The posterior neck muscles and shoulder complex were designed to carry the weight of ONE head not two or three times that amount; they can’t compete with the strain of the added burden. The muscles and connective tissue of the neck and shoulders that are compromised by HFP get over stretched and weak, the bones of the neck begin to compress often resulting in nerve impingement, hence neck and shoulder pain. So using the fire alarm analogy, the alarm is in the upper back, neck and shoulders, but the cause of the fire is the head that is being carried in front of the body instead of on top of it.

Correcting HFP and Other Structural Misalignments
The good news is both Harry and Sally went through a successful series of bodywork sessions known as Structural Integration (SI) based on the work of Dr. Ida Rolf, which corrected their HFP along with other structural misalignments, as evidenced in the after photos, and relieved them of their pain. One of the hallmarks of SI is active client participation to release tissue adhesions; you might call them ‘knots’ through movement. For example, in the treatment of shoulder or neck pain, the client is often seated on a bodywork bench while the practitioner manually addresses the soft tissue of the upper shoulders. The client is asked to move their head to the right or left . . . . while the therapist begins to release the adhesions. This places them in a vertical relationship to gravity which more accurately mimics our upright daily activities, rather than lying down on the bodywork table in a horizontal position.

Bodywork sessions that combine horizontal table work, seated bench work, standing work and movement education by design engage more of our body, our heart and our mind than traditional passive therapy. This active participation is essential in re-membering lost pieces of ourselves. When we view a part of our body that’s experiencing dysfunction as not belonging to us or somehow inherently broken, we increase the sense of separation and become even more fragmented. It is hard to heal from a place of disassociation. This is not a passive therapy .Harry and Sally also learned and continue to do corrective exercise which helps them maintain optimal alignment.

Take Responsibility For Your Healing
Many of us think we don’t look like Harry or Sally, but the truth is, most of us have never seen ourselves in a profile picture and we don’t know what we look like. We may feel betrayed by our bodies but most of us have been the betrayers, ignoring the fire alarms until they become full-fledged infernos. Conscious awareness of a problem is the first step in healing. There is a place inside all of us where our inherent wisdom resides, a place of creation, wonder and healing. Our bodies are waiting for us to come home to them, to reclaim them, take responsibility for them, and learn how to love them. We truly are miracles in motion, can you feel it?