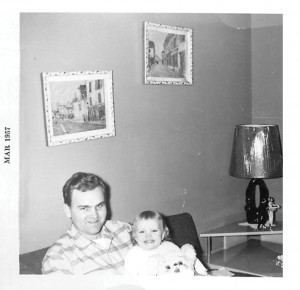 As a child, I thought there was nobody like my dad.  The strong, silent type – but when he had something to say, you had better listen! A wounded World War II veteran, he came back home to start a business and take care of his family.

As he approached his middle 70s, my mom, my brother, and I noticed a difference.  He became forgetful (more so than you would consider normal) and would ask mom the same question several times in a short period of time. But yet he could talk about things from his childhood as if they happened yesterday.

Mom took him to several doctors and specialists and he was diagnosed with Parkinson’s disease and the onset of Alzheimer’s.  Keep in mind that this was 25-plus years ago and not a lot of information was readily available for us to research so we could prepare for what was to come.  He was given a litany of medications in hope that it would slow the progress of both maladies.

For the next five to seven years, his deterioration was slow, but then as if someone turned on a switch, the Parkinson’s riddled his body, the Alzheimer’s consumed his mind, and it became harder and harder for my mom to care for him at home.

He had “Sundowner’s Syndrome” meaning as soon as evening came, his mind would ramp up.  He would wander the house looking for people who were not there.  He would constantly ask my mom who was sitting on the couch next to her.  He would try to turn the television around to see ‘how those people got in there’.  He thought they were talking directly to him and he would answer them.  One night he called  911 and told them that his two-year-old grandson was wondering around outside and that his parents (my brother and his wife) would not let him in. This was when we decided he needed to be in a nursing facility.

Here’s the sad part; there were occasions that he was aware of what was happening to him and he would beg us not to put him in a nursing facility and he promised to be better.  It broke our hearts but we knew that he was making promises that his mind could not keep.

We did decide on a facility and for the next months we would visit him there.  He forgot who everyone was, with the exception of me.  Every time I visited, he would cry and hold my hand and ask me why he was there.  He felt as if he was being punished for some crime he did not commit.  It was a very hard time for all of us.

About nine months later, he contracted pneumonia and was taken to a hospital where we all watched him slip off in to a coma.  Laboring to breathe, we all held his hand, talked to him, and kept cold compresses on his forehead to try to bring his temperature down.  Finally late one Sunday evening, after a valiant fight and over a week in the hospital, he passed on to be with his parents whom he loved and missed so much.

I know you have heard of Alzheimer’s as ‘The Long Goodbye’ and it truly is. You’re watching your loved one slip away daily into a world that is only about the size of your hand.  My advice to anyone out there who thinks they or someone they love may have the start of Alzheimer’s, please, please, please go or get them to a doctor. There are some new advances that were not around 25 years ago that may be able to help. Also, if you know of a loved one who is caring for an Alzheimer’s patient, call them, go see them, offer to sit with the patient so the loved one can get out of the house and get a break, hold their hand and let them cry or talk.  I saw what a toll my dad’s care took on my mom even though we did everything possible to give her a break.

Alzheimer’s Awareness is everyone’s responsibility – especially now with all the wonderful resources that anyone can research…..and don’t forget about the caregivers, they are the unsung heroes in all of this.

Share
Previous Can Alzheimer’s and Independence Go Hand in Hand?
Next An Open Letter to Surgical Practices