Take the Sting Out of Mosquito Allergies 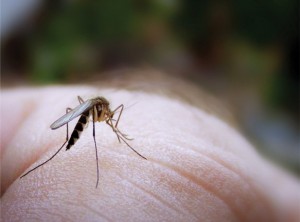 Mosquitoes are flying, biting insects that are closely related to flies and gnats. Only the female mosquito feeds on humans, and she needs a blood meal in order to produce eggs. During a feeding, the female mosquito bites the human skin, and injects saliva. The saliva contains various proteins that prevent the blood from clotting, as well as proteins that keep the blood flowing into the mosquito’s mouth.

Many of the mosquito saliva proteins can cause immune reactions, including allergic reactions. Typically, however, most people have a variety of reactions to mosquito bites, and the symptoms change over time, depending on the amount of bites a person received. These reactions can include both immediate and delayed swelling and itching around the bite area. These reactions tend to decrease in frequency after being bitten by mosquitoes over many years.

Generally, people with the above described reactions are not diagnosed as being “mosquito allergic.” This term is reserved for people with more severe or unusual reactions, such as those described below.

More Severe Reactions to Mosquito Bites:
“Skeeter Syndrome”
More severe reactions — rather than the typical itchy red bump experienced by most people as a result of a mosquito bite — occur less commonly. These may result in blistering rashes, bruises, or large areas of swelling at the bite sites. People who experience extremely large areas of swelling after a mosquito bite (such as swelling of most of an arm or leg, for example) have been dubbed as having “Skeeter Syndrome.”

In rare situations, some people may experience anaphylaxis after being bitten by mosquitoes. Other people may have experienced whole body urticaria and angioedema (hives and swelling), or worsening of asthma symptoms after being bitten. Typically, these symptoms occur within minutes after a mosquito bite, compared to Skeeter Syndrome, which may take hours to days to occur.

Who Is at Risk for Mosquito Allergy?
People who are at higher risk of developing an allergy to mosquito bites include:
• Those with frequent outdoor exposure, such as outdoor workers or frequent outdoor exercisers;
• Those with low natural immunity to mosquitoes, such as young children and visitors to a new area where they have not been previously exposed to the type of mosquito present
• Those with certain immunodeficiencies, such as AIDS or certain cancers (such as leukemias and lymphomas)

How Is Mosquito Allergy Diagnosed?
The diagnosis of mosquito allergy is based on a positive skin test or RAST using mosquito whole-body extract. Testing for mosquito allergy should only be performed in people who have a history of reactions more severe than the typical small, red, itchy bumps experienced by most people.

How Is Mosquito Allergy Treated?
Prevention. The prevention of mosquito bites is the main goal for those with mosquito allergy. These measures include:
• Avoiding areas infested by mosquitoes (such as swamps and tall grassy areas)
• Removing or treating areas of standing water (empty out or treat swimming pools with chlorine)
• Wearing long-sleeved shirts and pants if exposure to areas containing mosquitoes is planned
• Applying a commercially-available mosquito-repellant on exposed skin, such as those containing DEET (N, N-dimethyl-3-methyl-benzamide). DEET in concentrations of 10%-30% can safely be used on the skin of children older than 2 months of age.
• Treating clothing, camping tents and other fabric with permethrin (an insecticide), but do not apply directly to the skin.
• Also, since mosquitoes are attracted to body odor, skin temperature and carbon dioxide production, the limitation of strenuous exercise and sweating when in areas infested by mosquitoes may reduce the number of bites.

Local Reactions. Most localized reactions can be treated with the use of topical corticosteroid, such as hydrocortisone cream, as well as with oral antihistamines. In fact, Zyrtec (cetirizine) has been shown to reduce local reactions to mosquito bites when taken before being bitten. Some have suggested that those with mosquito allergy use Zyrtec on a daily basis during the summertime, when mosquito bites are most likely to occur.

Anaphylaxis. The treatment of anaphylaxis, which only rarely occurs as a result of a mosquito bite, should be treated in much the same way as anaphylaxis to insect stings. Allergy shots, using mosquito whole-body extract, have been shown to reduce severe reactions in people with a true allergy to mosquitoes.

For a Free Allergy Screening contact CareOne Healthcare today and find out if you may have allergies to mosquitoes or other common environmental substances.