By John P. Landi, MD, FACS, RPVI, RPhS, Diplomate of The American Board of Phlebology – 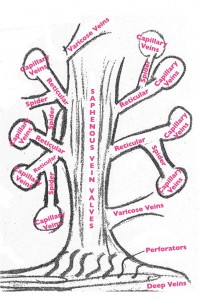 Spider Veins and Varicose Veins are vein disorders that affect approximately 80 million people in the United States alone and countless other throughout the world.

Within the last three years treatment of vein disorders has become a separate recognized medical specialty (called Phlebology). In the past it had been thought that varicose and spider veins were essentially cosmetic issues and had very few, minor symptoms. However, with the advent of advanced diagnostic techniques, especially ultrasound, we now know that both varicose and spider veins can cause significant symptoms and discomfort. Some of these symptoms consist of aching, cramping, burning, itching, swelling and restless legs, as well as brownish discoloration of the skin and even leg ulcerations.

The anatomy of the venous system in the leg is very similar to that of a tree. There is a centralized trunk to which branches are attached. These braches get smaller as they extend into the periphery.

If one looks at this picture we can see that the central trunk is the saphenous vein and then there are various branches that come off the trunk. These branches are called “Blue Veins” or Reticular Veins. These divide into smaller branches called “Capillaries” and ultimately result in spider veins. Sclerotherapy is able to treat all areas of this tree including the trunk. However, the majority of sclerotherapy is used to treat Reticular, Capillary and Spider Veins. Specialized Sclerotherapy usually with Ultrsonic Guidance is performed on the trunk of the tree. Sclerotherapy by definition is the injection of a solution into a vein to eradicate the vein and has been performed in offices for decades. As with other forms of vein treatment, sclerotherapy continues to evolve and there are now well-established state-of-the-art treatments involving sclerotherapy.

About twenty five to thirty percent of patients who only have spider veins have an underlying valve malfunction in their saphenous system as the source of the problem. Because of this, it is prudent that anyone being evaluated for Spider Vein treatment have a pretreatment ultrasound. The ultrasound should be performed by a Registered Vascular Technologist and interpreted by someone who is experienced in venous ultrasound interpretation. The ultrasound should look extensively at the greater and lesser saphenous veins, as well as any communicating and perforating veins. If an ultrasound shows vascular insufficiency then, prior to sclerotherapy, it may be recommended that the insufficient valves be treated by a closure procedure involving either Radio Frequency or Laser Ablation. If there is no evidence of valvular insufficiency, then sclerotherapy can be safely performed with a relatively high success rate.

Sclerotherapy is usually performed using magnifying glasses and often times in the dark with special polarizing light sources. There are multiple types of sclerosing solutions. In general, these solutions can be broken down into three different categories. There are detergents, which are exemplified by Polidocanol, Sodium Tetradecyl Sulfate (STS) and Sodium Morrhuate. There are osmotic agents exemplified by hypertonic saline usually in an 18-30% solution, as well as hypertonic saline and dextrose in a 5% solution. They are chemical irritants exemplified by glycerin and polyiodide.

The most commonly used sclerosing agent in the past was hypertonic saline, but because of pain with injection and multiple side effects including brownish discoloration and the potential for ulcerations, this solution has largely been replaced by the current solutions of Sodium Tetradecyl Sulfate and Glycerin. Sodium Tetradecyl Sulfate can be mixed with air or carbon dioxide to form a foam solution and the process of injecting it is called “Foamed Sclerotherapy.” Another detergent called Polydocanol can also be foamed and used for Sclerotherapy. Glycerin which is a chemical irritant is also excellent for the injection of very small capillary veins.

Those undergoing sclerotherapy treatment must realize that there is no, one quick fix to get rid of all spider veins. Spider vein therapy often takes multiple treatments and as a rule of thumb, it may take as many of two to five treatments per leg. Sclerotherapy treatments are usually spaced at intervals of three to six weeks and will not eradicate one hundred percent of the veins. However, usually about ninety percent of spider veins can be eliminated. Another commonly asked question about spider veins is will the treatment be permanent. Spider veins can recur and it is not unrealistic to think that over the course of time some will return. I usually recommend that following treatment patients return once a year for a touch-up or maintenance treatment.

When one is undergoing vein therapy one should look for a Board Certified Vein Physician. As of four years ago the treatment of veins has become a separate specialty and there are currently about 2000 physicians in the country certified by the American Board of Phlebology, which is the vein treatment society. In addition to this, one should also look for a location where the ultrasound is performed by a Registered Vascular Technician and interpreted by someone qualified to correctly interpret venous ultrasounds. Vanish Vein and Laser Center has two Registered Vascular Technicians who perform ultrasounds.

Dr. John P. Landi at the time of this writing is one of less than 2,000 physicians worldwide to obtain the designation of Diplomate of the American Board of Phlebology. In addition to this, he obtained his RPVI (Registered Physician Vascular Interpretation) and he is also one of less than 1,000 people both physicians and non physicians worldwide to obtain the RPhS (Registered Phlebology Sonographer). He has performed over 12,000 vein closure procedures in both Laser and VNUS Closure. He has also treated thousands of patients for spider vein resolution. He is medical director of Vanish Vein and Laser Center located in Naples which has been a state of the art Vein Center designated to vein treatment for over 12 years. In addition to this he is medical director of LaBella Mia Medical Spa which is attached to The Vanish Vein and Laser Center.

Share
Previous Normal Thyroid? Maybe Not.
Next Breast Cancer and Blood Sugar: Are they Linked?