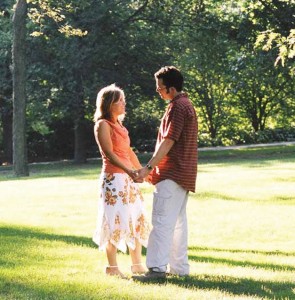 John and Martha were small town, Kansas farmers. John, the only son of an only son didn’t have any children. They were very successful and had about a dozen people working for them. Both were very involved in their church. They loved God. When they weren’t working on the farm, they were working at church, Martha in the children’s ministry and John cutting grass and also mentoring a few high school boys.

They tried to have children and could not. They were frustrated with that part of their life and not understanding why they kept praying and praying…but no child. They attempted to adopt children but ran into a lot of dead-ends and it just didn’t seem like the right thing for them to do.

One morning, John woke up and felt like God had answered his prayer to give him a child. It was only a few days later that he found out that his pastor had been called to the hospital. There had been a horrible accident and a single, pregnant, young lady had died, but her baby boy had been saved. No one in her family wanted the baby…too much work.

John and Martha adopted the little boy and named him Barry. As Barry grew, he was very life-giving and made friends easily.

John’s friend since high school, Ted, owned the local feed and seed. It was a combination of convenience, gas, and feed-n-seed store. When Barry became a teenager, John would send him to the feed-n-seed to pick up supplies. Barry always parked his truck around back since friends never came through the front of the store.

Ted’s son Jim was manning the cash register as Barry came busting in through the back door. He surprised a guy in a hoodie in front of the cash register, who swung a gun around and shot Barry right in the chest. Barry died within minutes.

Heartbroken, John and Mary leaned hard on their relationship with God, their pastor and church small group. They knew they had to forgive this guy who shot their son. But God, it would be hard.
Since they would be responsible for putting this murderer away for the rest of his life they took a day or two to pray before going to the jail. They prayed, “To have a conscious void of offense towards God and man.” (Acts 24:16) They needed to seek understanding so they would not fall into the painful sin of judgment.

God put it on their hearts to get to know their son’s killer. He was surprised to see them. His name was Jude. The whole time they talked he just kept his head down. For hours, Jude humbly answered their questions. They found out that Jude’s dad had left when he was a little boy. Jude was about the same age as Barry. Jude’s girlfriend had just gotten pregnant. Her very religious family had kicked her out of the house. They had a baby on the way and didn’t know what to do.

Jude’s idea was to go rob the feed-n-seed to get just enough money to take his future wife and baby far away and start over. Jude had never dreamed of doing anything like this in his life. This was his first crime. As John and Martha listened they realized he wasn’t a bad kid. He was just responding out of a bad situation.

He had never even fired a gun before until Barry bust through the doors, and startled him. He didn’t shoot to kill…he just shot. John and Martha dropped the charges, but the court still prosecuted

The rest of the story
John and Martha chose to forgive Jude, then went to find Jude’s girlfriend, Tanya, and asked her to come live with them. Miraculously enough, after petitioning the courts, Jude got a greatly reduced sentence. John and Martha “unofficially” adopted Jude, Tanya, and their new baby boy. So because of John and Martha’s heart to forgive, not only did they have a son in Heaven, now they had a “daughter, another son and a grandchild” that they treated like their own.

I don’t know about you but that would be hard for me to do. I do know that you can’t do that if your focus is only on you. God told John and Martha, “You can lament over the loss of Barry who is with me in Heaven… that’s ok… but you can also go change the lives of three other people.” And they did. They sowed a seed of forgiveness and got a harvest of love.

The names and places have been changed to protect their identities.

So Be Life-Giving…
you never know what may happen.

To read other life-giving articles by Pastor Alex, go to http://belifegiving.blogspot.com/

Share
Previous Tips For Living With Arthritis
Next Taking Care of Older Joints (and Younger Joints, Too)