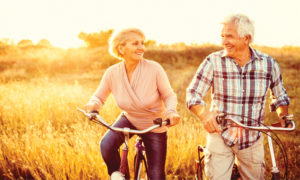 Diabetes and hearing loss are two of America’s most widespread health concerns. Nearly 30 million people in the U.S. have diabetes, and an estimated 34.5 million have some type of hearing loss. Those are large groups of people, and it appears there is a lot of overlap between the two.

A recent study found that hearing loss is twice as common in people with diabetes as it is in those who don’t have the disease. Also, of the 84 million adults in the U.S. who have prediabetes, the rate of hearing loss is 30 percent higher than in those with normal blood glucose. It’s possible that the high blood glucose levels associated with diabetes cause damage to the small blood vessels in the inner ear, similar to the way in which diabetes can damage the eyes and the kidneys.

Another recent study from Henry Ford Hospital in Detroit found women between the ages of 60 and 75 with well-controlled diabetes had better hearing than women with poorly controlled diabetes, with similar hearing levels to those of non-diabetic women of the same age. The study also shows significantly worse hearing in all women younger than 60 with diabetes, even if it is well controlled.

Even though hearing loss is about twice as common in adults with diabetes compared to those who do not have the disease, according to a study published in the Annals of Internal Medicine, hearing screenings often are not part of the regular regimen of care that people with diabetes receive.

We strongly encourage everyone who has been diagnosed with elevated glucose levels to immediately schedule a Baseline Hearing Test,” states John Hoglund, BC-HIS, ACA of Hoglund Family Hearing and Audiology Center. “You really want to establish a BEFORE picture the moment that you are told that your levels are high, so that you can keep track of how much your hearing is being affected by the condition. Baseline Hearing Tests can be scheduled at any of our Southwest Florida Clinics. We will work directly with your Primary Care Physician and Endocrinologist if you wish and furnish them with an analysis of your hearing. These comprehensive evaluations are provided by our Practice on a Complimentary basis!”

Unaddressed hearing loss negatively affects virtually every aspect of a person’s life, from cognitive function to emotional well-being, making it more difficult for people with diabetes to cope with their disease. Untreated Hearing Loss also dramatically increases the risk of falling, according to a report from Johns Hopkins research, which can be exceptionally risky for many Diabetics as well.

Since it can happen slowly, the symptoms of hearing loss can often be hard to notice. In fact, family members and friends sometimes notice the hearing loss before the person experiencing it.

Signs of Hearing Loss
• Frequently asking others to repeat themselves.
• Trouble following conversations that involve more than two people.
• People sound like they are mumbling.
• Problems hearing in noisy places such as busy restaurants.
• Trouble hearing the voices of women and small children.
• Needing the volume of TV or radio louder than others find comfortable.

DIABETES AND YOUR MEMORY
Mild cognitive impairment (MCI) refers to a group of symptoms in which people struggle with their ability to think and remember what they know. They often find it tricky to remember day-to-day things, but their memory troubles aren’t severe enough to cause serious problems with everyday living. The study, published in the American Journal of Psychiatry, reviewed 62 research studies to look for things that could indicate the risk of MCI worsening to dementia. Almost 16,000 people with MCI were included in these studies. The researchers, led by Prof. Gill Livingston of University College London, found that in people with MCI, Diabetes seems to make it more likely that MCI will progress to dementia.

Hearing Loss has a direct impact on cognitive decline as well. Johns Hopkins studies have shown that untreated hearing loss dramatically increases risk of Memory issues and Dementia. It is not yet clear all how these increased risk factors interact, but it shouldn’t be taken lightly!

“When you look at the fact that Diabetes increases risk for hearing loss… hearing loss increases risk of memory problems and cognitive decline… and Diabetes increases risk of Mild Cognitive decline escalating to dementia… I think you’ll agree that diabetics NEED to monitor their hearing very closely,” Mr. Hoglund concludes. “We’ve always offered these tests on a Complimentary basis as a public service for Southwest Florida residents, so please call us at 239-494-8651 to arrange this Baseline Hearing Test!

Share
Previous Celiac Disease: A Complex Autoimmune Disorder
Next Is Urgent Care the answer to Your Medical Needs?