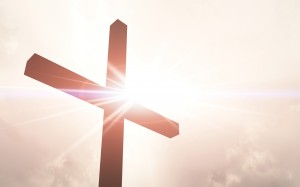 That Sunday morning saw history’s defining moment.  Simply put, it was the finale’ of the most important series of events that ever happened.

But before we get to Sunday morning . . .

On the previous Friday, outside the city of Jerusalem, an innocent man hung suspended on a cross.  He had come through a farce of a trial, and He had been convicted based on false testimony from paid witnesses.  He was nailed in place through all four limbs, brutally wounded from a variety of beatings and abuses, and His scalp was shredded by a crown of thorns.

His execution was carried out by a Roman death detail, trained and proficient in their gruesome art. And, probably about 3:00 in the afternoon, they shoved a spear into his torso and pronounced Him dead.

Had you been there that afternoon, you might have experienced some remarkable things.  There was a protracted period of darkness, and a number of other distinctly supernatural events.  However, you might have wondered what it all meant.

Years later, the Apostle Paul would sum it up with these words,  on the cross, God the Father “made the One who did not know sin to be sin for us, so that we might become the righteousness of God in Him.” (2 Corinthians 5:18, HCSB).  A substitutionary death,  His life given for us.  Our sin given to Him.    Payment made for the sins of mankind.

They placed his dead body in a cave tomb, and they rolled a big rock over the mouth of the cave.

Have you ever swiped your debit card when you weren’t quite certain you had enough in your account to cover the cost?  You know that moment when you wait for the receipt, wondering if it’s going to print?  Saturday was like that.  Payment had been made, and the universe waited to see if the transaction would clear.

If Friday was the payment, Sunday morning was the receipt.
In the pre-dawn hours of Sunday, Jesus of Nazareth simply did not stay dead.  It was not a metaphorical event, a mystical event, or a mythological event.  It was a miraculous event.  His heart began to beat again.  His eyes came open, and He was alive.  And He walked out of His grave under His own power.

Today, someone has wisely said that if Jesus Christ remained dead, then nothing really matters.  But if Easter Sunday happened (and hundreds of first-century witnesses say it did), then nothing else matters.

One has died.  And His death will cover the eternal penalty for every mistake and wrongful act you’ve ever committed, if you will only follow Him.  Today, He is alive, forever, to keep us reminded that His one-time death was eternally enough.

Share
Previous Stomach Pain: Is it Irritable Bowel or Something More Serious?
Next Hairpieces and Toppers