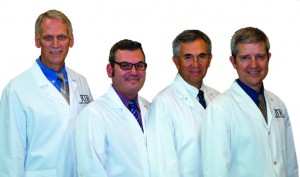 In the past few years PSA has been at the center of a great deal of controversy.  Yearly screening of men with this blood test, which has been the norm has come under fire following recent recommendations by the United States Preventative Services Task Force (USPSTF) with the recommendation by this group that screening be eliminated. Since this mandate has come out, the reaction from physicians and the general public alike have been one of mixed confusion—especially since cancer of the prostate is the second most common cause of cancer death in U.S. men.  In this article we will review PSA , the pros and cons of its use as a screening modality, and our view as urologists caring for men.

Prostate specific antigen or “PSA” is a protein molecule produced exclusively by the prostate gland. PSA functions in the body to facilitate male sperm fertilization of the female egg for reproduction.  It is an important component of seminal fluid where it helps to create the right viscosity for sperm to swim.  PSA production occurs throughout a man’s life and while found in very high concentrations in the semen, it is also measureable in the blood, albeit in much smaller amounts.  Many benign states can lead to higher than normal measureable amounts in the blood including infection, trauma and simply the growth of the prostate that occurs as a man ages. It can also be measured in higher amounts with prostate cancer as the irregularly growing cancer cells tend to “leak” more PSA into the bloodstream than normal healthy prostate tissue. In other words, a high PSA is not specific for prostate cancer but if cancer is present the PSA is a very sensitive indicator.

Since its identification in the laboratory, PSA has been extensively studied. Because it is such a sensitive marker for the presence of prostate cancer, in the past 2 decades routine yearly PSA screening for men after age 50 (earlier if there is a family history) has been the norm and has led to earlier detection of the disease than ever before. Numerous studies both in the U.S. and Europe have shown between a 20 and 47% reduction in cancer deaths with PSA screening. (reference: Schroder FH. Et al: Screening for prostate cancer decreases the risk of developing metastatic disease: findings from the European Randomized Study of Screening for Prostate Cancer (ERSPC). Eur Urol 2012; 62(5):745-52).

Elevated PSA levels above the threshold level of 4ng / ml are typically followed by a prostate biopsy—an outpatient office procedure under local anesthetic–to further rule out the presence of cancer. If prostate cancer is detected, a discussion between physician and patient about the disease and its potential management can direct next steps, including both surgical and non-surgical options.

In May of 2012 the USPS Task Force, a panel of primary care physicians and epidemiologists funded, staffed and appointed by the U.S. Department of Health and Human Services released recommendations that PSA routine screen should not be done as the number of men to screen in order to avoid prostate cancer mortality was not cost effective and together with the potential risks of treatment produced more harm than good. Unfortunately, the evidence the task force, which had no urologists on the panel and was led by a pediatrician, used to make these recommendations was of poor quality and disregarded many other clinical trials documenting the positive results of screening both in terms of decreasing prostate cancer deaths but also the harms of the disease such as from metastasis and bleeding/obstruction of the urinary tract. As urologist facing prostate cancer on a daily basis, we know all too well both the death as well as the severely diminished quality of life that prostate cancer can deal to men.

By recommending that PSA testing should be abandoned completely or restricted, we at RTR Urology feel the USPSTF made a step in the wrong direction in terms of  patient-centered care. If widely implemented, these guidelines would deprive many men of the opportunity to pursue shared decision making about possibly life-saving PSA testing. At RTR Urology, we follow closely the new National Comprehensive Cancer Network (NCCN) guidelines for prostate cancer early detection with the aim to minimize the harms and maximize the benefits of PSA testing. These guidelines are important because many health insurance companies determine coverage based on NCCN panel recommendations. The NCCN guidelines recommend that men obtain a PSA test at age 45 years. This PSA test value would determine the frequency of subsequent testing. The NCCN suggests annual to biannual follow-up PSA testing for men with a PSA above the median for their age, and men with a PSA below the median should have another PSA test at age 50.  Median PSA levels are 0.7 ng/ml for men 40-49 years of age and 0.9 ng/ml for men 50-59 years.

This recommendation is based on observational data suggesting that baseline PSA testing men in their 40’s and early 50’s might enable future risk stratification for prostate cancer.  A large study of Swedish men demonstrated that a single PSA test before age 50 predicted the risk for subsequent prostate cancer diagnosis, metastases and death up to 30 years later.

Other recommendations include advising men with a PSA above 1.0 ng/mL to have a follow-up PSA test annually or biannually, and that men should generally be referred for a biopsy when their PSA is higher than 3 ng/mL.

The NCCN recommends offering PSA testing only to men with a life expectancy of more than 10 years. For older men, the NCCN offers a number of ages at which to stop PSA testing.  Screening can stop at age 69, continue up to age 74 with an increased PSA threshold for biopsies, or stop at age 75 for men with a PSA below 3.0 ng/mL.

It is our belief at RTR Urology that PSA screening greatly reduces suffering and death from prostate cancer and that the benefits far outweigh the harms. We remain committed to a patient centered approach that includes education, expert management and shared decision making in men’s health.

Share
Previous Did You Hear…
Next Is Prostate Cancer Hiding from You and Your Doctor?