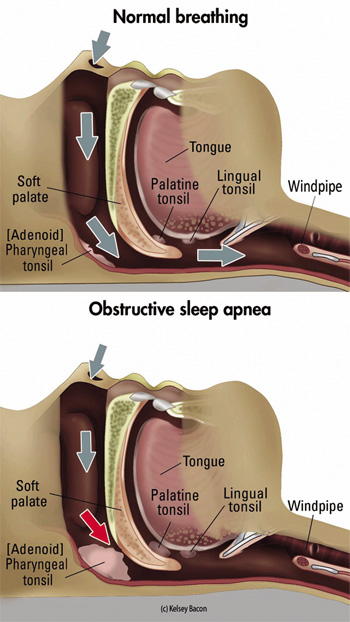 The most common form of sleep disordered breathing (SDB) in the United States. It has been estimated that severe cases affects up to 4 million people, while milder SDB may affect up to 18 million. Over 80% of cases are undiagnosed. Recent research indicates a prevalence of 4 to 9% for women and 9 to 24% for men.

Sleep apnea is associated with episodes of not breathing for a prolonged period (sometimes longer than 30 seconds) and hypopnea, which is breathing more shallowly than normal. Apnea (when the breathing is stopped) may occur from 1 to 30 or more times per hour, may cause the heart rate to swing from very high to very low, a severe drop in oxygen in the bloodstream, and brief brain wave changes which occur, causing brief “waking up” or arousal so the person will take a deep breath. This is usually heralded as a loud Snore. Mild OSA occurs when there are over 5 episodes of Apnea and or Hypopnea per hour, while Moderate and Severe OSA is when there are over 15 or over 30 per hour.

The cardinal symptoms of sleep apnea include the “3 S’s”: S noring, S leepiness, and Significant-Other (who is the one who usually reports the snoring and sleep apnea episodes). Patients with sleep apnea often think they sleep very well, not realizing that so many episodes of almost waking up at night interrupts their sleep to the point of “sleep deprivation”. They will often fall asleep in the afternoon or take small naps almost anywhere and anytime. This Sleepiness can be quite dangerous, even a potentially lethal symptom of sleep apnea because of the frequency of auto accidents.

The worst, but least appreciated aspect of OSA, is the myriad of dangerous medical problems and complications it is associated with beside the sleepiness and fatigue so commonly experienced. There medical studies which demonstrate the significant OSA appears to cause fluid retention (edema), hypertension (high blood pressure), strokes (both know and silent ones that only show up on brain scans), atrial fibrillation (a very abnormal heart rhythm which may result in a stroke), and possibly the tendency for diabetes.

Although there have been attempts to perform surgery, laser or ablation to portions of the soft palate (upper rear soft tissue of the throat) and various dental or nasal appliances, these have met with poor success overall, and the mainstay of treatment is a machine called a CPAP (continuous positive airway pressure) which is worn at night to assist breathing adequately. This usually is a small mask worn over the nose which can provide a very small amount of increased pressure which “holds up and open” the soft tissues of the glottis in the rear of the throat preventing collapse and closure of the airway, blocking adequate breathing.

In Men with untreated Severe OSA, studies have proven there is an increase in fatal heart attack and stroke as well as Non-fatal heart attacks, strokes, and bypass surgery, or the incidence of balloon angioplasty and stents, and that treating the patient with CPAP markedly reduces these risks. OSA may also occur only after a person has had enough heart damage that they develop CHF or Congestive Heart Failure (associated with edema and severe shortness of breath, sometimes awakening them from sleep). Treating OSA with CPAP in patients with CHF decreases blood pressure and shrinks some of the enlargement of the heart, and improves the heart function.

In order to diagnose the problem, a sleep study must be performed, usually in a sleep lab during an overnight sleep. Many parameters are continually monitored including frequency and depth of breathing, brain waves, eye movement, leg movement (to evaluate for “restless leg” if a problem), heart rate and rhythm and oxygen in the blood stream. Once OSA is diagnosed, usually another overnight is required to adjust the CPAP function to best suit the patient’s needs. Although most people adapt to the CPAP and mask quickly (afraid NOT to wear it) there are some who need further adjustments or changes in the mask type and pressures used. The important thing is not to give up, but keep trying until it works well and you are comfortable with the device.

Taking that first step and admitting there is a problem and talking about this with your doctor so that a sleep study can be arranged is the largest hurdle.