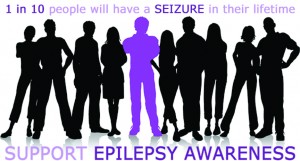 Epilepsy is a neurological disorder that causes people to have recurrent seizures.  A seizure is a brief disruption of electrical activity in the brain. Epilepsy is not contagious, not a mental illness and not mental retardation.

What Causes Epilepsy?
More than half the time, the cause is unknown.  Where a cause can be determined, it is most often one of these:  head injury, infections that affect the brain, stroke, brain tumor, Alzheimer’s disease, or genetic factors.

Who has Epilepsy?
Approximately 3 million Americans have epilepsy, and over 200,000 cases are diagnosed in the United States each year.  One in 10 people will have a seizure at some point in their lives.

Epilepsy doesn’t discriminate.  It affects children and adults, men and women, and people of all races, religions, ethnic backgrounds, and social classes.  While epilepsy is most often diagnosed either in childhood or after the age of 65, it can occur at any age.

How is Epilepsy Diagnosed?
Patient history, neurological examination, blood work and other clinical tests are all important in diagnosing epilepsy.  Eyewitness accounts of patients’ seizures may also be important in helping the physician determine the type of seizures involved.  The electroencephalograph (EEG) is the most commonly used test in diagnosing epilepsy.  An EEG provides a continuous recording of electrical activity in the brain during the test.  Some patterns of activity are unique to particular forms of seizures.  In some situations, physicians may also use CT scans, MRIs, and Pet scans to look at the internal structure and function of the brain.  These tests may help pinpoint causes of seizures.

How is Epilepsy Treated?
Medication.  Most people achieve good seizure control on one or more of the variety of medications currently approved for the treatment of epilepsy.

Surgery.  Several types of surgery may be used for patients whose seizures do not respond to medication.  The most common are lobectomy and cortical resection.  These may be used when a seizure focus can be determined and removal of all or part of the affected lobe of the brain can be performed without damage to vital functions.

Vagus Nerve Stimulation.   A small pacemaker-like device is implanted in the left chest wall with a lead attached to the vagus nerve.  The device is then programmed to deliver electrical stimulation to the brain at regular intervals.  Up to two-thirds of patients whose seizures do not respond adequately to medication see improvement with this method.

Ketogenic Diet.  Used primarily in children, this medically supervised high fat, low carbohydrate, low protein diet has been shown to benefit as many as two-thirds of the children who can maintain it.

Types of Seizures
Seizures can take many different forms, often not resembling the convulsions that most people associate with epilepsy.  Common types of seizures include:
• Generalized Tonic Clinic (Grand Mal):  Convulsions, muscle rigidity, jerking.
• Absence (Petit Mal):  Blank stare lasting only a few seconds, sometimes accompanied by blinking or chewing motions.
• Complex Partial (Psychomotor/Temporal Lobe):  Random activity where the person is out of touch with his surroundings.
• Simple Partial:  Jerking in one or more parts of the body or sensory distortions that may or may not be obvious to onlookers.
• Atonic (Drop Attacks):  Sudden collapse with recovery within a minute.
• Myoclonic:  Sudden, brief, massive jerks involving all or part of the body.

How to Handle a Seizure
• Don’t panic!
• Note time when seizure starts.
• Direct the person away from hazards or remove objects that may present a danger.
• If the person is having a convulsive seizure, turn him on his side and cushion his head.
• Remove glasses and loosen tight clothing.
• Do NOT put anything in the mouth.
• Do NOT give liquids or medication.
• Do NOT restrain.
• Remain present until the person regains conscious awareness of his surroundings.