Muscle Activation Techniques – What it is & How it will Help You This Month: An experiment 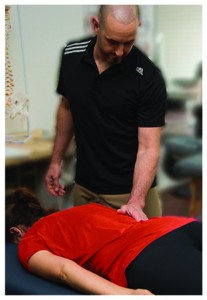 What if you stood up, jumped 6 inches in the air, then landed?  Wait, don’t answer yet.  Here comes the experiment…  You have two options for landing – A and B.  In A (soft landing), you land and upon impact you bend your ankles, knees, hips and back.  In landing B (hard landing), you land straight and stiff as a pencil.  Which would you want to experience?  I’m going with A.

So what’s the difference?  Keep it simple.  In landing B (hard) you would have felt more force, more impact.  Why though?  You weigh the same in both A and B.  You jumped the same height as well so the force was the same.  So what caused you to experience more force, or impact or shock, especially if there was no more!?  The answer is that although the forces were the same, they were handled or tolerated very differently in your body.  In A, your muscles absorbed the forces.  In B, those forces were minimally absorbed by your muscles.  So where did those forces go?   The answer is they went to other tissues (areas) in your body.  They went to any combination of joints, bones, cartilage, ligaments, tendons, or other tissue anywhere in your body from your toes to your neck and head.  And why didn’t those forces go to those places during landing A?  Because your muscles absorbed those forces.

You could easily see how doing that hard landing multiple times could lead to minor and eventually serious injury.  Imagine if you did that every day.  Maybe not the jump every day, but rather taking steps.  What if you took thousands of steps a day and you had some muscles in your body that weren’t working.  Where would those forces go?  Same answer as before. They would go all over your body where they weren’t designed to go at that moment (just like our jump experiment).  In an overwhelming amount of situations, it is our body’s inability to tolerate the forces placed on it that lead to the symptoms we feel.  Remember, pain, aches, stiffness, tight muscle and decreased mobility are symptoms – they are a result of something causing them.  We need to identify and treat the causes not the symptoms.  Return the body’s ability to tolerate the forces placed on it and we see the symptoms go away.  In our body’s case, we aren’t removing the forces we are exposed to. We are helping ensure that they are absorbed by muscle instead of going to parts of the body that aren’t meant to deal with them.

Imagine if some muscles weren’t functioning properly – meaning they were unable to contract and therefore unable to tolerate the forces placed on them.   We looked at that scenario with the jump and with walking.  What about running, exercising, lifting weights or playing sports where the forces are even greater?  What about sitting at a desk for hours every day in positions that were not ideal?   Would you want muscles not working in either case?   Imagine if as a result of your muscles not working, those forces caused a bunch of problems and you tried to treat the problems!  Imagine if some muscles didn’t work which caused others to become tight which in turn caused you to have poor posture.  Imagine if you tried to relax the tight muscles instead of activating the ones that didn’t work.  Imagine if you tried to treat the area where you felt the pain instead of treating the thing that caused you to feel the pain!?  What kind of outcome and results would you  expect?

Now Imagine if there was a system to assess, identify and correct the muscular imbalances in your body by activating muscle and balancing your muscular system.  The system is MAT and it’s ready to help you.