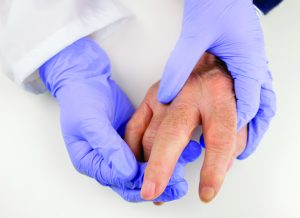 When most individuals go to their doctor for arthritis, they most likely will be put on prescription pain medication. What’s wrong with this treatment protocol is multifocal in explanation. Not only will pain medicine not cure arthritis, nonetheless in some cases, but it can also actually make it worse. Alternative therapies and treatment options are available, and it all starts with your gut health.

Evidence and studies suggest that individuals with inflamed intestines and gut health are more susceptible to arthritic conditions. High levels of a gut bacterium, Prevotella copri are known to cause inflammatory bowel responses (1). Along with these findings, low levels of other bacterium and pathogenic (disease-causing) bacteria are directly linked to various forms of arthritis.

Gut Inflammation is a result of the immune system attacking itself. We all have microbes in the gut, which are bacteria, some good and some bad. Gut inflammation is when the bad bacteria cause small holes in the intestines leak into the bloodstream, also known as leaky gut. This creates an inflammatory reaction throughout the body. Along with arthritis, common symptoms of leaky gut are ulcerative colitis, Crohn’s disease, brain fog, fibromyalgia and lupus to name a few.

What can I do to relieve the inflammation?
An elimination diet is an outstanding place to start when trying to remove inflammation from the body. There are common trigger foods that many physicians regret to tell their patients to avoid. However, a better place to start is by only eating non-inflammatory foods, such as quinoa, kale, chicken, turmeric, garlic, ginger, cayenne, lemon water, omega-3 fatty acids, tart cherry juice and sweet potatoes.

Along with an elimination diet, people with arthritis need to know about an alternative method that has helped countless individuals combat the painful side effects of arthritis.

During chelation therapy, a solution of EDTA (ethylenediamine tetraacetic acid) is injected into the bloodstream. The EDTA chemical binds with heavy metals and minerals such as arsenic, lead, mercury, copper, iron, calcium, and aluminum, and removes them from the body naturally.

How does it work?
Chelation therapy is recognized for its ability to detoxify years of build-up of heavy metals. Chelation is pronounced as Key-Lay-Shun and is used to successfully treat many different forms of heavy metal toxification including mercury, cadmium, and lead.

The amino acid, EDTA is administered into the bloodstream via an IV, and its role is to bind to heavy metals and remove them from the body through the urine. DMPS and DMSA acids are also used in some instances to remove mercury. Chelation successfully decreases inflammation in the body, including the gut, but removing the toxins and built-up irritants from the blood and tissues.

Functional medicine is integrative medicine that focuses on a complete look at a person’s lifestyle, genetics, environmental, and social factors concerning their overall health’s condition.

Dr. DeStefano, of Root Causes Holistic Health & Medicine in Ft Myers, FL, incorporates IV & Chelation therapy with hyperbaric chamber sessions to combat multiple chronic conditions and disease states. The methods Dr. DeStefano uses to rectify gut inflammation, as well as the inflammatory response throughout the entire body is multifocal. She listens to her patients well, and works out specific protocols for their unique issues.

Welcome to G.I. Associates of S.W.Florida

Healing Outside the Box with Turmeric from Fiji