“God Help Us Keep Our Farm” 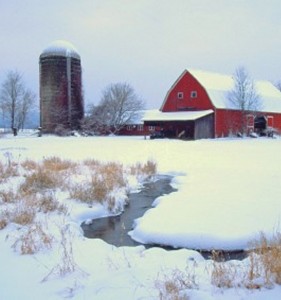 About 45 minutes east of Des Moines, Iowa is a little Dutch community of about a 1000 people called Sully. And just a seven minute drive from Sully is a large 200-acre farm. It seems very large to me since my subdivision lot is barely six tenths of an acre.

In the summertime this farm, like all the other farms in this part of Iowa, is covered with corn. From an airplane it looks like an ocean of green. In the winter it looks much like rolling hills of brown and tan carpet except where the farmers have plowed in the poop from their hog houses.

This area of the country is well watered by annual rains and is considered part of the breadbasket of America. Most of these farms had been in the same families for generations, that is, until the mid 1980’s. Due to an unusual drought in the 1970’s, many farmers in this area had to mortgage their homes, land, and equipment just to feed their families. Then in the 1980’s double digit interest rates on all their loans forced many families to sell the farms: generations of sacrifice gone in less than ten years.

I listened to this story in the car on the way back from running errands in Sully with my friends, Jerry and Phyllis, third-generation farmers. During this very painful time in their family’s history, Jerry and Phyllis reared five children, three of which were foster children. Phyllis explained that they were in the same situation during the 70’s and 80’s as all of the other farmers in their community. “Everyone was trying to dig out from under their mountain of debt; some made it but many did not.”

Very sad times indeed
I asked Phyllis how they had managed to keep their place. Her answer did not surprise me since they were Christ followers, but it challenged me to be more like my sixty-something friends. Phyllis said, “We got on our knees and asked God to help us keep our farm, and He did.”

The previous Sunday night I had attended church with Jerry and Phyllis. They were junior-high small group leaders. When we arrived at church I met Pastor Jim, a tall friendly and clean-shaven man in his early 30’s. The church gym was filling up with youth dressed in athletic wear.

They were preparing for an upcoming dodge ball contest with other churches in the area. After about an hour of dodging a room full of balls, only Jerry had gotten hit on the side of the head, we all went to the youth room where the youth band did a great job leading worship. Then Pastor Jim gave a brief message about the difference between “doing a service” for someone and “being a servant at heart.”

Pastor Jim gave everyone a half sheet of paper with two paragraphs. The first paragraph had four lines about the Pierce family who recently had lost their home in a fire and nothing was saved, they have two sons 17 and 12, and two daughters 14 and 8. The second paragraph was about the Houck family. The dad had severe health issues and due to his lengthy stay in the hospital, had lost his job. His family, with three children from 9 to 19, was totally out of money.

It was December 6, nineteen days before Christmas.
As I sat in a room with Jerry and his eleven junior-high boys, I listened to each one of these young men pray. Each one prayed with passion and individually asked God to bless the Pierce and Houck families. As a youth group they asked God to help them raise money for these families, thousands of dollars. I later found out that most of the youth worked extra jobs and used their own Christmas money to give to these two families in need.

“These folks are creating the next generation of life-giving people,” I thought.
As we pulled back onto the gravel road for the seven minute drive to their farm, I realized that these people were Holy. They loved God with everything they had and with everything within them.

They didn’t go to church once a week as a religious duty, but they lived with purpose every day to know and act like their life-giving God. They had set themselves apart to love God and others more than anything and they withheld nothing they owned but freely shared with those around them.

So when they prayed, “God help us save our farm,” I believe God wanted to save their farm as much as they wanted.

Share
Previous Available Alzheimer’s Medications
Next Wellness from the Inside Out vs. Outside In