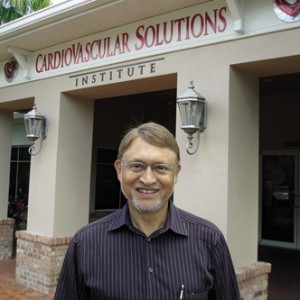 I was raised in a boarding school with regular meals and never consumed soda, fast food, etc. In adulthood, I kept up good eating habits along with my beautiful wife Melanie and our two children. We also tried to stay healthy by not smoking or drinking in excess.

With good dietary habits, why am I a patient of Dr. Gino Sedillo?   Statins were only marketed in 1987, so for 50 years prior, my arteries accumulated and clogged with cholesterol, before I was able to curb further build-up with statins.  In June 2003, I had a stroke on my left side.  After partial recovery, my Internist told me, “One day you are going to need roto-rooter/plaque removal surgery and hence I will send you to the very best, not only in Sarasota, but in the US.”  And that was how I first met Dr. Sedillo.

In April 2008, I underwent my annual nuclear stress test and was pronounced OK.  Six months later (October), I had trouble walking from the mailbox to the front door and underwent another nuclear stress test.  This time, I was over 90% blocked in two arteries behind my heart and my left carotid.  Dr. Sedillo called it the “snowball effect of cholesterol buildup.” I checked into the hospital the very next day and Dr. Sedillo told me that he would stent the 2 arteries behind my heart, but a vascular surgeon might be needed for carotid surgery which would leave me with a large scar on the side of my neck. I expressed my displeasure about the scar.  The next morning, Dr. Sedillo proceeded with the cardiac catheterization and placed two stents in my coronary arteries.  After completing the two behind the heart, he examined the carotid and  announced that I would not need a vascular surgeon, nor would I have a scar because he could perform the procedure through the groin. This made me very happy and pleased. The procedure was successful!

Share
Previous Q & A Women’s HEALTH
Next Lead Poisoning is No Joke!