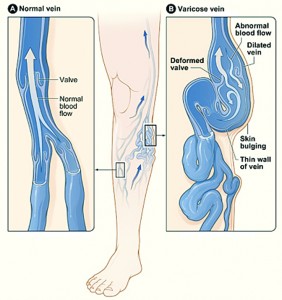 Up until the year 2000 the physicians had very limited treatment options for patients with symptomatic superficial insufficiency.  Conservative therapy consisting of elevation, anti-inflammatory medications and compression stockings has changed only in the fabric technology.  Today there are more shear compression garments which has helped improve patient compliance with this type of therapy.  Great saphenous vein ligation and stripping and phlebectomy of more superficial tortuous branches were generally reserved for patients with the most severe presentations of bleeding, ulceration and venous claudication.  These procedures were dangerous and rarely considered in patients since general or regional anesthesia was commonly employed.  Patients usually were hospitalized for 2-4 days and it was often weeks until full recovery and return to work or normal activity was possible.  From the time of the reintroduction of great saphenous vein ligation and stripping in the late 1950s until endovenous closure made its debut in 2000, there was little advancement in the understanding or treatment of venous reflux disease.

Varicose veins was often considered a cosmetic condition, rather than one of the many manifestations of a potentially more significant underlying condition, now referred to collectively as venous insufficiency or venous reflux disease.  Presenting symptoms other than varicose veins may include swollen achy legs, venous claudication, skin discoloration and thickening, overt external bleeding from an eroded vein just under the skin to ulceration of the skin in the lower leg and ankle area.  Other, more obscure and less appreciated signs and symptoms of venous insufficiency include nighttime leg cramps, restless legs syndrome, nighttime urination and “idiopathic” edema.  An estimated 35-40 million adults in the USA suffer from the more commonly appreciated and recognized presenting symptoms, and countless of others may also be affected by this same problem but are likely going under diagnosed or undiagnosed.

The physical, emotional and functional impact of severe venous insufficiency is not quantifiable as the true prevalence of the disease is not known and the persistent misperceptions of the public regarding the symptoms of the disease, the method of diagnosing the disease and most importantly the available treatment options continue to be issues.  The natural history of untreated severe superficial venous insufficiency has been well documented in the wound care centers around the nation as the unchecked venous hypertension progresses from the benign appearing varicose veins to the chronically swollen limb 5 years later, to the insidious skin changes which ensue in the years to follow resulting in one of the more serious complications such as bleeding, recurrent infection or ulceration.

Endovenous closure has changed the evaluation and treatment paradigm for patients with all of the above noted presenting symptoms and signs.  This minimally invasive technique of sealing the incompetent vein from within (rather than stripping the vein out) results in more effective and immediate remedy of the underlying problem of venous hypertension.  Side branches are immediately depressurized (rather than avulsed as in stripping) which frequently results in marked resolution of the varicose veins, expeditious improvement in skin discoloration, bleeding or ulceration.   In addition, the procedure may be more safely performed in a completely outpatient setting under local anesthesia with very little time lost from work or normal activity.  Venous insufficiency is accurately and reliably diagnosed with duplex ultrasound in the capable hands of an experienced registered vascular technologist.

Venography is essentially a thing of the past in the diagnosis of venous pathology, unless performed in an angiography suite in conjunction with thrombolysis (infusion of clot busting medicine) of deep vein thrombosis(DVT) or some other interventional procedure.  Duplex ultrasound also allows for stratification of the severity of venous insufficiency which is critical to the decision phase and planning of subsequent treatments.  Not all insufficient veins need to be sealed.  Only those severely insufficient veins in the distribution of the patient’s symptoms and pathology should be considered for ablation after failure of conservative therapy, as described above, for a 3-6 month trial as mandated by insurance panels.  The only exceptions to this conservative trial policy may be those patients who have had recurrent bleeding episodes from varicose veins or those who have large ulcerations which threaten the patient’s immediate well being or serve as an ongoing infectious source.

Endovenous ablation or endovenous closure in the treatment of symptomatic superficial venous insufficiency has allowed a more proactive approach to patients with this disease.  Rather than reacting to the complications of the disease with compression wraps, wound care and submission, we now have a much more definitive, effective and noninvasive therapy to offer patients with appropriate indications for intervention.  Endovenous ablation has opened the door to millions of adults who were once thought to be too sick for stripping, too young for stripping, too obese for stripping, too old for stripping, too anticoagulated for stripping and now we should be encouraged to reconsider these and many other patients for a more definitive treatment.  Our understanding of lower extremity venous pathophysiology has risen to a higher level due to the availability of ultrasound guided, percutaneous endovenous ablation and we now understand that veins other than the great saphenous vein, such as the small saphenous vein, anterior accessory great saphenous vein, posterior accessory great saphenous vein, intersaphenous (Giacomini) vein and the various perforating veins can contribute to the underlying venous hypertension which causes the myriad of symptoms and signs of venous reflux disease.  Endovenous closure is not a license to seal veins at will.  Rather, it is a minimally invasive, highly effective method which, in experienced hands and judiciously applied, has changed for the better, the lives of many patients with symptomatic superficial venous insufficiency.  Endovenous closure has indeed changed the treatment paradigm of venous insufficiency as much as any other modern minimally invasive technique in any other disease entity and we will not likely witness as significant a technologic advancement in the treatment of superficial venous insufficiency in the next 20 years.

Leaders in Vein Treatment
The modern evaluation and treatment of venous insufficiency is the singular focus of Dr. Magnant and his professional and compassionate staff at Vein Specialists at Royal Palm Square in Fort Myers, FL. He can be contacted either by calling 239-694-8346 or through his website, www.weknowveins.com, where patients can submit their request for an appointment. He encourages readers to review his website which is specifically written for his patients and also take the time to view his photo gallery. Venous disease is not a laughing matter, but sometimes it is only through humor that some of us are motivated to act.