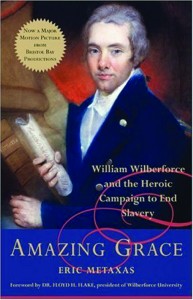 Duty.  The word itself has sort of an old fashioned feel, doesn’t it?  And yet there is somethings there.  Perhaps it’s even something quite important.

I was reading, earlier this week, from Eric Metaxas’s excellent book Amazing Grace, a biography of the English abolitionist leader William Wilberforce.  In the book, Metaxas writes of the death of Admiral Lord Nelson in the battle of Trafalgar (a naval battle against Napoleon’s French fleet) in October, 1805:

Every British schoolchild has heard the mythic heroics and details of that day over and over and can recite them chapter and verse: how Nelson, aboard the HMS Victory, sent word to his fleet before the battle – “England expects every man will do his duty”; how during the battle he was mortally wounded by the musket ball of a sniper standing in the rigging of the French ship Redoubtable; how his final words were, “Thank God, I have done my duty” . . . .

Duty required of Admiral Lord Nelson that he place his life on the line.

Hard not to dwell on that sort of thought as we consider what it is to be a Believer, and how it is that we came to have access to God.  Were it not for the willingness of Jesus Christ to die in our place, as His duty to His Father’s justice required (on our behalf), Christianity understands that we would all be irretrievably lost.

And His death for us has given us a great gift: eternal life, even as it requires that we give that life back to Him.  The Apostle Paul, whose letters, gathered and treasured by the early church, gave us much of our New Testament, said it like this, “I consider my life worth nothing to me; my only aim is to finish the race and complete the task the Lord Jesus has given me – the task of testifying to the good news of God’s grace.”

I bet that you won’t be shot today by a French sniper (it’s sort of an unusual way to die).  But if your life did end today, child of God, and you had just a fleeting moment this side of eternity, would you be able to look back in that moment and say, like the old British officer,  and like the One who hung on a cross centuries earlier, “Thank God, I have done my duty?”

Share
Previous Does Your “EYE-Q” Need a Tune-up?
Next Debunking the Myths of Retirement Communities