Does Your Partner Snore? 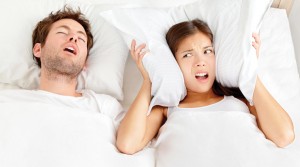 Snoring is a sound produced by vibration of the soft tissues of the upper airway during sleep. Habitual snoring is common, occurring in 44 percent of males and 28 percent of females who are between 30 and 60 years of age in the general population. If you are routinely awakened by the unpleasant sound of your bed-partner snoring loudly in your ear, rest assured you are not alone.

Snoring indicates increased upper airway resistance, and can be a sign of obstructive sleep apnea (OSA).

Sleep apnea is a condition that occurs when individuals stop breathing for short periods of time while they are asleep. There are two types of sleep apnea. One is called “obstructive sleep apnea” and the other is called “central sleep apnea.”

Sleep apnea more commonly affects men than women. Other risk factors include: middle and older age, being overweight or obese, and having a small mouth and throat.

Sleep apnea is a very common problem.  Some people with sleep apnea don’t have symptoms, or they don’t know they have them. They might think that it’s normal to be tired or to snore a lot.  Most times, the bed-partner is the first to notice any symptoms, such as snoring or daytime fatigue.  Patients with long standing sleep apnea tend to get adjusted to the problem and usually obtain medical attention at the request of the bed-partner.

There are many concerning side effects of sleep apnea that can be very serious and dangerous. In fact, sleep apnea can be deadly. If you have symptoms of sleep apnea, it is important to recognize them and seek treatment.

Side effects of sleep apnea include:

• High Blood Pressure. Hypertension is a common side effect of sleep apnea. Studies show that people with moderate to severe sleep apnea are more than twice as likely to also suffer from high blood pressure.

• Decreased blood oxygen level. Since breathing is interrupted, when a person has sleep apnea, the oxygen level in the blood decreases while the level of carbon dioxide can increase.  Having low blood oxygen levels can also affect the brain resulting in equilibrium and memory deficiency.

• Development of Diabetes Mellitus. Diabetes can also be a sleep apnea side effect. Studies have found that patients with obstructive sleep apnea are more than two and one-half times more likely to develop type 2 diabetes. Scientists theorize that high levels of the hormone cortisol, which are produced as a result of the stress caused by sleep apnea, lead to increased resistance to insulin and glucose intolerance.

• Daytime sleepiness and fatigue. Alertness and memory function of a person is affected due to decreased cognitive function with sleep apnea.

• Irritability, short-temperedness, anxiety and depression. As sleep apnea can cause sleepiness and fatigue, when a person is sleep deprived, it affects all aspects their temperament both at home and at work.

• Headache and migraine. Because of disturbed sleep that leads to blood-oxygen depletion and constriction of the small blood vessels in the brain, morning headaches and migraines can occur.

• Obesity. Aside from being one of the causes of sleep apnea, obesity can also be a side effect of sleep apnea. Hormonal imbalances caused by sleep apnea as well as decreased activity from fatigue contribute to weight gain.

• Accidents. Patients with sleep apnea are at increased risk for accidents, even if they don’t feel sleepy.

Sleep Apnea can be Fatal
In addition to the health risks posed by the sleep apnea side effects listed above, sleep apnea increases the risk for several more serious cardiac events. Obstructive sleep apnea (OSA) can cause bradycardia, where the heart beats slowly at less than 60 beats per minute, as well as atrial fibrillation (afib), a condition where the electrical signals to the heart become uncoordinated causing rapid and in-effective heart contractions. Over time, afib can increase the risk for more serious complications such as stroke.

If your doctor or nurse suspects you have sleep apnea, he or she might refer you to a sleep specialist for a “sleep study.” Sleep studies are usually done in a sleep lab. For the study, you spend the night in the lab, and you are hooked up to different machines that monitor your heart rate, breathing, leg movement, oxygen level, and brain activity.

The results of the test will tell your doctor or nurse if you have sleep apnea, or other conditions that might interfere with your sleep quality and duration.

I usually advise my patients with sleep apnea to stay off their back when sleeping. Weight loss is also advised if he or she is overweight.  Avoid alcohol and sedatives before bedtime, as they can make sleep apnea worse.

The most effective treatment for sleep apnea is a device that keeps your airway open while you sleep. Treatment with this device is called “continuous positive airway pressure,” or CPAP. People getting CPAP wear a face mask at night that “splints” the airway open and keeps them breathing. People with sleep apnea who use a CPAP machine feel more rested and generally feel better.

Occasionally, for certain patients, we use another device that is placed in the mouth called an “oral appliance” or “mandibular advancement device.” It also helps keep the airway open while the patient sleeps. Rarely, when nothing else helps, I recommend surgery to keep the airway open. Surgery is not often effective, and even when it is, the problem can return.

If snoring or sleep apnea affects you or someone you love, call the Lehigh Regional Medical Center sleep office at 239-368-8039 to schedule an evaluation with a sleep specialist today.

Share
Previous CATARACTS? Monofocal vs. Multifocal Lenses
Next Wellness from the Inside Out 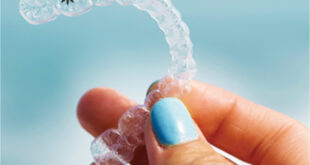 Invisalign vs Braces: What’s the Difference?

By Dr. Ricardo S. Bocanegra, DDS Both Invisalign braces and the older traditional brace are …