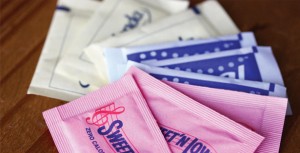 We’ve all heard it. You need to choose diet soda to lose weight.  Pick low-calorie foods, and choose low-carb drinks.  Food marketers have responded to public demand, and to maintain taste acceptance, producers have begun cramming artificial sweeteners in every bar, shake, or beverage variety on the shelf. It’s simple; they reduce calories while maintaining a sweet taste. With our nation’s epidemic of obesity, how could that be so bad? Well, it isn’t necessarily bad. Except for the rumors we’ve all heard. About how artificial sweeteners can cause cancer, and have been linked to reproductive problems in animal studies.

The first of its kind, this study looked at 17 obese people with an average BMI of 42 who didn’t consume any artificial sweeteners and were free from diabetes. Volunteers were given one on of two things prior to a glucose challenge test, either a glass of water, or a drink made with sucralose (Splenda).

What the researchers found was indeed surprising. Compared to drinking water only, the sucralose drink caused approximately a 20% increase in peak insulin levels, and a higher peak plasma glucose concentration. This higher insulin and higher glucose becomes detrimental, because when people constantly secrete high levels of insulin it almost always eventually leads to type 2 diabetes. This is problematic for people who are overweight because being obese already dramatically increases their risk of developing diabetes.

So how does it happen? Well the researchers suspected that our taste buds may be responsible. Artificial sweeteners, like sucralose interact with receptor on the tongue to tell people they are consuming something sweet, and doesn’t necessarily know it’s calorie –free. However, digestive hormones can be released just by seeing food—like how looking a piece of cake or a juicy steak can cause the even the most self-controlled of us to salivate a little. And the same thing can happen with tasting something sweet. Signals from our tongue communicate and send signals digestive organs about what we just consumed. And then our digestive organs react.

The gastrointestinal tract as well as the pancreas (where insulin is produced) is capable of detecting foods or beverages that are sweet, and begin to release hormones as a result. This happens even when the artificial sweeteners are administered in a very lose dose. This study used 48mg, which is about about 4% of a yellow 1-gram packet of Splenda.

At Cederquist Medical Wellness Center, our patients often desire to avoid or eliminate artificial sweeteners while they are losing weight. This easy to do, and with the resources our center can provide, you’ll find it surprisingly easy to do as well. We partner with patients for a total health transformation, and can cater to each individuals’ needs with regards to artificial sweeteners.