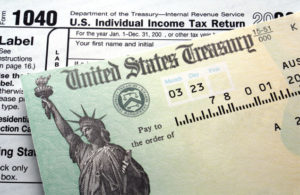 Decrease in Refunds
Last year, the United States Government Accountability Office estimated that about 4.6 million fewer filers would receive refunds in 2019 and that another 4.6 million filers would owe money to the IRS. While it is still very early into the filing season, the prediction thus far seems accurate. As of the first week of February, the IRS issued 4,672,000 refunds, with the average refund totaling to $1,865, down from last year’s refund average which was set at $2,035.

While the Tax Cuts and Jobs Act limited certain tax deductions and exemptions, it did bring about some tax cuts (highest bracket down to 37% as opposed to 39.6%). While Americans may be receiving lower refunds this year, they nonetheless did receive a tax cut by having less money withheld from their paychecks.

Lower Refunds Due to Lower Withholding
Our federal income tax is a “pay-as-you-go” tax, where employers withhold taxes from employee paychecks during the year. Withholding helps the IRS collect taxes year-round (steady stream of revenue) and prevents individual taxpayers from owing large amounts of tax once they file their tax returns. Each year, employers withhold over $1 trillion in tax from employees’ pay. The amount that is withheld depends on the individual’s tax situation (number of allowances claimed, additional requests to withhold, etc.).

Refunds this year are lower mainly because taxpayers received their “tax cut” throughout the tax year in the form of a larger paycheck. Last year the IRS modified the withholding levels so that withholding would be more accurate, meaning that taxpayers would neither owe money (under withholding) nor be entitled to a refund (over withholding).

Employees have control over the amount that it is withheld from their paycheck, and can indicate so on their W-4, which can be modified by the employee as necessary. The IRS recommends that employees submit a W-4 each year or as often as necessary to reflect changes in personal (i.e. increase/decrease in dependents), financial (i.e. spouse enters workforce) and other (i.e. change in the tax code) circumstances. Taxpayers can use the online IRS Withholding Calculator to determine the right amount that is to be withheld from their paychecks.

Inaccurate W-4s at times lead to over withholding, which means that you are essentially giving the government an interest-free loan until you prepare your annual tax returns. Employees who periodically adjust their withholding have more money available with each paycheck, meaning that they can use this money to contribute to their retirement plan or set it aside in a savings or investing account.

Income Amount Increases for 2019 Tax Bracket
Tax rates for 2019 have stayed the same, but the income ranges for each bracket have been adjusted for inflation. The 2019 tax bracket (shown below) will apply to this year’s earnings and will be reported in your 2019 tax return due next year.

Bonie Montalvo practices in the areas of estate planning, business succession planning, tax planning, and not-for-profit law. Ms. Montalvo has her LL.M. in Taxation from the University of Florida and is fluent in Spanish.

Superfoods: What are they and how do I use them?