By Russell Becker, DO, Vascular Surgeon 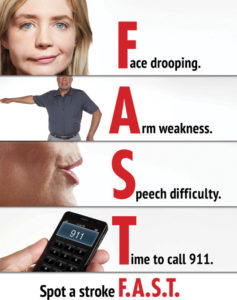 Temporary loss of speech, balance, forgetfulness, one-sided weakness, facial droop, are all signs of early stroke. Every year in the United States nearly 800,000 people will suffer from a stroke. If it’s not caught early enough, it can lead to death, paralysis, cognitive impairment, aphasia, and many more complications. Stroke prevention cannot be stressed enough, and knowing the signs and symptoms is crucial. The three causes of stroke stem from either the heart, blood vessels to the brain, or blood vessels within the brain.

Types of Strokes:
• Hemorrhagic strokes are when a damaged blood vessel begins to bleed then ruptures
• Ischemic strokes are formed by blood clots that obstruct a blood vessel that supplies blood to the brain
• TIA (Transient Ischemic Attack), also known as a mini-stroke, is caused by a temporary clot that blocks blood flow

The blood vessels that connect directly to the to the brain are the carotids. When the carotid arteries are occluded and blocked, they prevent proper oxygen and blood flow, and a blood clot or the plaque that’s blocking the artery can break loose and cause a stroke. The carotid arteries can be fixed surgically by cleaning them out, or stenting. Both are very safe procedures, and either can be done in the majority of patients, depending on what is most appropriate for the patient.

Carotid endarterectomy is a common vascular surgical procedure which may help prevent the risk of having a stroke. Scientific evidence from recent studies supports carotid endarterectomy as an effective method of stroke prevention for people with carotid artery blockage of 70 percent or greater. It also may be beneficial for people with moderate blockage of 50 to 69 percent and recent symptoms of stroke.1

Severe blockage is called carotid stenosis. Carotid stenosis may cause the patient to experience a TIA. Common temporary symptoms include difficulty speaking or understanding others, loss or blurring of vision in one eye and loss of strength or numbness in an arm or leg. Usually, these symptoms resolve in less than 10 to 20 minutes and almost always within one hour. Even if all the symptoms resolve, it is very important that anyone experiencing these symptoms call 911 and immediately be evaluated by a qualified doctor.1

When oxygen and blood can’t reach the brain, the brain cells begin to die very rapidly. When you are experiencing symptoms of stroke, minutes matter! There is a medication called tissue plasminogen activator (tPA) that can break through a blood clot, but not everyone with stroke can receive the clot-busting drug tPA. If the medical team deems it fit for you, the medication must be given within 3 to 4 ½ hours of the onset of symptoms.

Prevention is key. Getting a cardiovascular workup including an ultrasound of the carotid arteries is critical. Strokes are a leading cause for death as well as long-term disability. Having a stroke can cause permanent damage like vision loss, paralysis, cognitive impairment, and speech disorders. If the stenosis isn’t severe enough for surgery, the patient should have regular follow-up testing, and in some cases, the blockage might be able to be controlled medically.

Can a High-Tech Chair Cure Incontinence

Caring for Your Pelvic Floor Through Menopause and Beyond

Healing Chronic Illness with Congee Supporting Our Blood Through Food