When You Are At Your Wits End 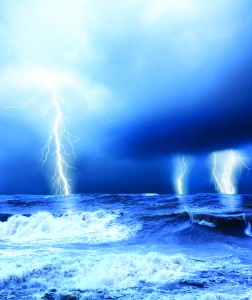 The Bible tells the story of a group of sailors who went out to sea and encountered a huge storm that almost killed them:

23Others went out on the sea in ships; they were merchants on the mighty waters. 24They saw the works of the LORD, his wonderful deeds in the deep. 25For he spoke and stirred up a tempest that lifted high the waves.  26They mounted up to the heavens and went down to the depths; in their peril their courage melted away. 27They reeled and staggered like drunken men; they were at their wits’ end. 28Then they cried out to the LORD in their trouble, and he brought them out of their distress. 29He stilled the storm to a whisper; the waves of the sea were hushed. 30They were glad when it grew calm, and he guided them to their desired haven. 31Let them give thanks to the LORD for his unfailing love and his wonderful deeds for men. Psalm 107:23-31

Can you relate to this group of sailors? Maybe the circumstances in your life have caused your courage to melt away. Perhaps you are going through a storm of your own. You may find yourself at your wits’ end without any clear direction as to what to do next. If so, follow the example of the sailors in the Bible.

There first thing they did was cry out to the LORD in their trouble. Don’t underestimate the power of prayer. An old gospel song says, “when God is all you have, you’ll find He’s all you need.” God responded to the sailor’s prayer by bringing them out of their distress. In fact, it says he stilled the storm to a whisper and the waves of the sea were hushed. God can do that in your life and in your situation as well. Call out to him. His timing is not always as quick as we may like but He knows what is best for each of us.

When the storm was over, the text says that God guided the sailors to their desired haven. They found their place of rest and peace. Storms don’t last forever… and neither will yours. Keep your faith in God. Cry out to Him in your pain. Trust that He knows what’s best and keep praying and seeking your desired haven… it may be just around the corner.

And then, don’t forget to thank God when He does bring you through the storm. The story concludes by saying, “Let them give thanks to the LORD for his unfailing love and his wonderful deeds for men.”

Storms, crises, pain and problems are an unfortunate reality of life. We grow through the pain and learn valuable lessons during these times. Don’t give up, give in, or quit. When you find yourself at your wits’ end…hang on, cry out to God, and look for His deliverance.

Tim Neptune is the Lead Pastor of Venture Church of Naples. Venture Church is a new church plant in the East Naples community near the intersection of 951/41. Check the church website at venturenaples.com for service times and location or call (239) 775-5323 for more information.

Share
Previous 3D Mammography
Next May is Older Americans Month