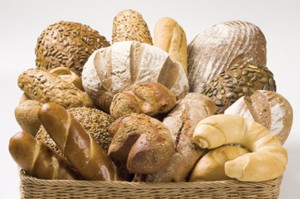 Celiac disease is a condition in which the immune system responds abnormally to a protein called gluten, which can cause damage to the lining of the small intestine. Gluten is found in wheat, rye, barley, and a multitude of prepared foods. Celiac disease is also known as gluten sensitive enteropathy (enter-OHpathy), celiac sprue, and nontropical sprue.

The small intestine is responsible for absorbing food and nutrients. Thus, damage to the lining of the small intestines can lead to difficulty absorbing important nutrients; this problem is referred to as malabsorption. Although celiac disease cannot be cured, avoiding gluten usually stops the damage to the intestinal lining and the malabsorption that results. Celiac disease can occur in people of any age and it affects both genders The symptoms of celiac disease vary from one person to another.

In its mildest form, there may be no symptoms whatsoever. However, even if you have no symptoms, you may not be absorbing nutrients adequately, which can be detected with blood tests.

As an example, you can develop a low blood count as a result of decreased iron absorption, or osteoporosis (weaking of the bones) as a result of calcium or vitamin D malabsorption.

Some people have bothersome symptoms of celiac disease, including diarrhea, weight loss, abdominal discomfort, excessive gas, and other signs and symptoms caused by vitamin and nutrient deficiencies. Other conditions associated with celiac disease include diabetes, hypothyroidism, and a skin disease
called dermatitis herpetiformis (an intensely itchy rash of fluid filled lesions usually located on the elbows, knees, buttocks, face, neck and body).

Celiac Disease Diagnosis: Because the symptoms are similar to that seen in many other gastrointestinal disorders, a patient would normally need to see a gastrointestinal specialist to get a firm diagnosis. Blood tests can be done to look for antibodies that become elevated in response to the body’s immune reaction to gluten. The diagnosis is then confirmed by obtaining a biopsy of the small intestine during an upper endoscopy, a test performed through the mouth with the patient asleep.

Other tests would be blood tests to look for the effects of malabsorption of nutrients, such as a complete blood count, vitamin levels, lipid levels, and thyroid levels. In addition, a bone density scan should be done to look for thinning of the bones.

Celiac disease treatment: The cornerstone of treatment for celiac disease is complete elimination of gluten from the diet for life. Gluten is the group of proteins found in wheat, rye and barley that are toxic to those with celiac disease. Gluten is not only contained in these most commonly consumed grains in the Western world; it is also hidden as an ingredient in a large number of prepared foods, as well as medications and supplements. Maintaining a gluten free diet is a challenging task that will require major lifestyle adjustments. Strict gluten avoidance is recommended since even small amounts can aggravate the disease. Working with an experienced celiac dietitian can help you to learn how to eat a gluten free diet, what foods to avoid, and what foods to add for a nutritionally balanced diet.