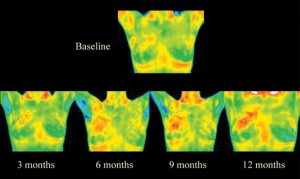 “Which one is better—a mammogram or a thermogram?” That’s what everyone wants to know. It’s a perfectly logical question, one I am asked everywhere I go. But it’s the wrong question. It’s more complex than that. Yes, both tests can produce images of the breasts, and both offer the possibility of early breast cancer detection, but other than that, they have nothing in common. They’re different tests, produced in different ways, showing completely different things.

Thermography has other unique abilities as well. It can indicate estrogen dominance, an imbalance in estrogen levels associated with higher breast cancer risk. It can detect lymphatic congestion, also a precursor to disease. The effects of diet can also be clearly seen. Women on a typical Western diet who switch to a healthier, plant-based diet, show remarkable improvement in their thermal patterns.

In short, thermography is a way to monitor breast health, not just a way to detect breast disease. Mammography can show you if you have a cancer or not, but other than that it has little purpose. Thermography offers a woman the chance to become aware of worrisome physiological changes before there is a diagnosable cancer—which is when risk-reduction strategies such as diet, exercise, and stress reduction are most effective.

The unique ability to detect changes suspicious of breast cancer before it can be seen on a mammogram is both the promise and the dilemma of thermography. The promise, because every woman wants a better early warning system; the dilemma, because it flies in the face of conventional medical thought.

The thermography/mammography debate is a microcosm of the debate between alternative and conventional medicine, which explains much of the confusion and controversy surrounding the matter. Thermography is firmly rooted in the alternative world, where the concept of disease prevention through lifestyle change is well-accepted. Conventional medicine is based on surgical procedures and pharmaceuticals. It can’t deal with something that is too early to be diagnosed. Only you can do that.

As medicine becomes more integrative, many of these issues will disappear. Thermography will become more accepted as paradigms change and perspectives broaden. Thermography doesn’t replace mammography. It is not FDA approved as a stand-alone test. It adds a much needed piece to the puzzle, providing risk information and possible early warning that mammography cannot. It can help you become aware of your breast health. It’s not just another way to find disease.

Dr. Thomas Hudson, a long-time Naples resident, is a diagnostic radiologist specializing in breast imaging. His experience in both mammography and thermography interpretation gives him a unique perspective on breast health. The above is an excerpt from his book, Journey to Hope, which focuses on breast cancer prevention through a healthy lifestyle. Dr. Hudson offers phone consultations for women who want to better understand their mammogram or thermogram results, and also helps recently diagnosed women navigate the cancer process more peacefully. For more information about the book, or to schedule a consultation, go to www.yourjourneytohope.com.

Share
Previous Breast Cancer and Blood Sugar: Are they Linked?
Next All About Earaches and Children