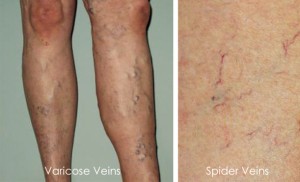 When varicose or spider veins bleed it’s time to get serious about your vein evaluation and treatment.

Susan is a 68 year old woman with many years of vein problems including swollen legs and varicose/spider veins.  She had been told to wait until she had “pain” or other “problems” caused by her varicose veins.  One night she had to get up to go to the restroom and on the way down the hall she noticed something running down her leg.  To her shock she looked down to find dark blood pumping out of a varicose vein in her mid calf area.  She had left a trail of blood from the bedroom to the bathroom.  An ambulance ride and several hours later her bleeding vein was sutured in the local emergency room and she was sent home with a bandage and ace wrap.  Many patients do not seek further specialized medical  attention and go on to have recurrent bleeding episodes. Several patients I have seen for this problem have bled in their beds while sleeping and required blood transfusion. Fortunately, her primary care physician made a referral for formal venous evaluation and treatment.  Subsequent evaluation revealed severe leakiness in the valves of the great saphenous vein in the affected leg and she underwent successful endovenous ablation (sealing of the faulty vein from within) of this vein in the affected leg and had complete recovery and no chance of future bleeding.

Of the estimated 40 million adults in the USA who suffer from symptomatic venous insufficiency, or venous reflux disease, many are focused solely on its visual or cosmetic impact and may still be under the misconception that venous insufficiency is not a medical problem. Since the introduction of percutaneous endovenous ablation or endovenous closure 15 years ago, millions of patients who were once thought to be untreatable or who were left undiagnosed have been given a second chance.

Until the early 2000s, unless patients had severe external varicose veins or other complications of venous insufficiency such as ulceration or external bleeding, those who presented with leg swelling and disabling leg cramps or diffuse discoloration of the legs were often passively treated with reassurance, elevation, and compression hose, none of which were effective long term solutions.  They were essentially left to experience the natural history of untreated or, at best, inadequately treated venous insufficiency and venous hypertension and often went on to develop long-term complications. Therefore, rather than label the diagnosis as varicose veins and reserve treatment for only those most obvious and severe-appearing cases of varicose veins, a broader, umbrella diagnosis of venous insufficiency was introduced. Venous insufficiency encompasses the full spectrum of presentations.

Venous insufficiency is defined as the condition in which the valves of the deep and/or superficial veins of the lower extremities no longer function properly in the intended one-way manner. These one-way valves are either stuck or scarred in the open position (as in the case after recanalization of the veins after a deep vein or superficial venous thrombosis), or continue to open( prolapsed) beyond the closed position to a refluxing position (as in the case with hereditary or acquired deep or superficial venous insufficiency), both of which result in increased hydrostatic pressure in the downstream venous system. The normal lower extremity venous pressures of 10-15 mm/Hg may increase to as high as 60-100 mm/Hg, depending on the extent and severity of the clinical condition. Longstanding venous hypertension may lead to a myriad of conditions and potential complications.

Varicose veins
Varicose veins are dilated, abnormally appearing veins usually found in the legs, which arise from the leaking veins that have become increasingly pressurized. Spider veins, also referred to as telangiectasias, are tiny dilated blood vessels in the skin that become swollen with stagnant blood. Technically, they are very small varicose veins. They can be related to pregnancy or hormonal variations and are therefore most commonly found in women.

Spider veins can effectively be treated with injection depending on the size and depth of the veins. However, if a patient has diffuse spider or varicose veins and symptoms of leg swelling and/or pain, one needs to be sure that deeper veins are not the cause of the patient’s symptoms and external veins. In the presence of untreated venous insufficiency, treatment of spider veins is much less effective than on an otherwise healthy leg.

A logical approach to venous disease evaluation is to consider the venous system from the inside-out. Rather than simply considering what is visible, physicians and patients should look deeper to ensure that the deeper veins are working properly. Typically, the saphenous veins – those underneath the skin and fat but outside the muscle, collectively referred to as the superficial venous system – are the veins that cause most patients problems. Much less frequently, the deep system of veins in the muscle compartments may also contribute to patients’ symptoms.

Other patients may present with swollen feet and ankles, achy legs, a feeling of tiredness, persistent itching over the affected area of skin discoloration, punctate hemorrhage from small veins, and, in the most severe cases, ulcers. A number of patients have also described restlessness in the affected legs during the night, which subsequently resolved after effective treatment of the underlying venous insufficiency.

Venous insufficiency can be reliably diagnosed and stratified by a registered vascular technologist with experience in venous insufficiency ultrasound studies. The current recommendation is for a more proactive evaluation of patients with the above referenced signs and symptoms with consideration of more definitive therapy after conservative trials, when appropriate, by an experienced, board-certified vascular surgeon with a strong dedication to venous evaluation and treatment.

At Vein Specialists, Dr. Magnant and his staff specialize in up-to-date evaluation and treatment of vein pathology: everything from spider veins and swollena, achy legs to ropey varicose veins; purple, discolored, and thickened skin; and leg ulcers. Their singular focus is on venous pathology, including non-invasive ultrasound investigation of patients with signs and symptoms of venous insufficiency; conservative treatments, and the most high-tech endovenous closure techniques for definitively treating abnormal veins.

Leaders in Vein Treatment
The modern evaluation and treatment of venous insufficiency is the singular focus of Dr. Magnant and his professional and compassionate staff at Vein Specialists at Royal Palm Square in Fort Myers, FL. He can be contacted either by calling 239-694-8346 or through his website, www.weknowveins.com, where patients can submit their request for an appointment. He encourages readers to review his website which is specifically written for his patients and also take the time to view his photo gallery. Venous disease is not a laughing matter, but sometimes it is only through humor that some of us are motivated to act.

About Dr. Magnant
Dr. Joseph Magnant earned his Doctorate in Medicine and performed his General Surgery residency at the Medical College of Virginia in Richmond, Virginia.  He completed his Vascular Surgery fellowship at Dartmouth-Hitchcock Medical Center in Hanover, New Hampshire and is certified by the American Board of Surgery in Vascular Surgery. He is an active member of the Society for Vascular Surgery, the American College of Phlebology, the Southern Association for Vascular Surgery and is also a Fellow of the American College of Surgeons.  He practiced arterial and venous vascular surgery as part of a large multi-specialty group for 14 years after he completed his fellowship in vascular surgery until opening Vein Specialists in 2006.  He is the only board certified vascular surgeon in southwest Florida whose practice is 100% dedicated to venous diseases and he has offices in Fort Myers and Bonita Springs.