Varicose and Spider Veins What you need to know?

By Dr. John P. Landi, MD, FACS, RPVI, RPhS, Diplomate of
The American Board of Venous and Lymphatic Medicine 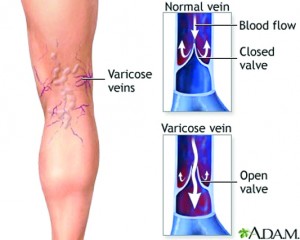 United States.  Varicose veins are large and ropey in appearance and usually appear as bulging in the leg anywhere from the thigh to the ankles.  Spider veins, on the other hand, derive their name from the fact that they look like little spider legs and these also can occur anywhere in the leg, but are most common along the outside of the upper thigh and around the ankle.  It was once thought that both varicose veins and spider veins caused no symptoms.  We now know that this is not true and that varicose and spider veins can lead to a multitude of symptoms including aching, cramping, leg heaviness, leg swelling, itching and even restless legs.

Up until approximately ten years ago the only treatment for varicose veins was a relatively radical procedure called “Ligation and Stripping” in which the saphenous vein, which is a vein that runs from the ankle to the groin along the inside of the leg, was removed by pulling it out of the leg.  This was followed by multiple incisions to remove all the branches.  The end result was a leg that had many incisions and, in effect, was a trade off of a vein for a scar.  In reference to spider veins the only treatment for many years was to inject them with a saline solution called “Hypertonic Saline”.  This solution irritated the inside of the spider veins to cause them to stick together and ultimately dissolve.  However, this procedure of saline injections was often painful and had many side effects including brownish discoloration of the injected areas and, even in some cases ulceration of the skin.  Both of these treatments are not commonly done in the current age of varicose and spider vein treatment.

The gold standard now for varicose vein treatment is called a “Closure Procedure”.  The main point to remember with varicose veins is that they are almost always due to insufficiency of the valves in the saphenous vein system or occasionally in accessory veins.  Blood flows from the feet to the heart through these veins.  In the leg the superficial system of veins consist of the saphenous vein which has two components –  the greater saphenous vein which runs along the inside of the leg under the skin and the lesser saphenous vein which runs along the back of the leg between the ankle and the knee.  Both of these veins have multiple valves within them.  If the valves don’t work properly then blood, in effect, can not get through the valves, leaks backwards and is then pushed into the skin to form the varicose veins.  We now know that by sealing these valves the varicose veins can be eliminated.  The procedure to seal the valves consist of closing them with either a Laser or Radio Frequency catheter.  Both work equally well.  Laser catheters function by heating the inside of the saphenous vein so that it ultimately coagulates, scars and dissolves.  Lasers function at different wave lengths and the commonly used wave lengths for laser vein treatment are 800, 940, 980, 1064 and 1470.  All of these work equally well and their use is usually dependent on physician preference.  There is another catheter called a “Radio Frequency” catheter which goes by the trade name of Vnus which also works very well in closing the saphenous vein and this works on the principle of the radio frequency coagulating the inside of the vein.

As far as spider veins are concerned it was once thought that they were strictly cosmetic and, in fact, most insurance companies adhere to this.  However, we do realize that spider veins can cause symptoms and many times they can cause the same symptoms as varicose veins.  We also know that spider veins frequently are a result of the valves in the saphenous vein malfunctioning.  So the same process that causes varicose veins can also cause spider veins.  Because of this, in order to best access the cause of either spider or varicose veins, it is usually necessary for the patient to undergo a venous ultrasound to specifically look for malfunctioning valves.  This is called “Reflux”.  Reflux is measured in two ways.  One, is by the actual identification of the valves leaking and secondly, by the length of time that it takes the valves to leak.  The normal valve should open and close in one half second.  The longer a valve malfunctions, the more severe is the insufficiency.  An ultrasound should be done by a physician or person specifically trained to do the ultrasound and should also be interpreted by a physician specifically trained to read the ultrasounds.

Treatment of spider veins has also changed dramatically over the last eight years.  Initially, the only treatment for spider veins was something called “Sclerotherapy” which was the injection of the veins with the solution to cause the veins to dissolve.  The solution that was commonly used was a concentrated saline solution.  Nowadays, saline is used very infrequently.  There are much better sclerosing agents including Tetradecylsulfate and Polidocanol (asclera).  These two solutions are in the category of sclerosing detergent agents.  This means that they can be mixed with air or carbon dioxide to form a foam solution.  Foam sclerotherapy is the current state of the art for sclerotherapy.  Other sclerosing solutions include iodine and hypertonic saline.  In addition to sclerotherapy there are new vein therapies for the very smallest of veins.  Two of the most current therapies are the vein wave and the vein gogh.

In summary, there are many new modalities of treatment for both varicose and spider veins.  It cannot be stressed enough that prior to a vein treatment a thorough venous ultrasound looking for reflux is recommended.

Dr. Landi is medical director of Vanish Vein and Laser Center, a state of the art, dedicated vein treatment center. He is one of less than 2,000 physicians worldwide to achieve the designation of Diplomate of the American Board of Venous and Lymphatic Medicine. He is a fellow of the American College of Surgeons, a fellowship trained vascular surgeon, Board Certified in General Surgery and has achieved both the RPVI and RPhS certifications in vascular ultrasound.

To learn more or to schedule an appointment, please call Vanish Vein and Laser Center at 239-403-0800 or visit us online at www.vanishvein.com.

(99th Avenue North across from the entrance of Pelican Marsh)