A unique business opportunity! Available In Your Area As Well As Nationwide. Read on…this is quite different from anything else! 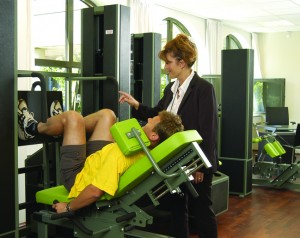 Imagine this: For just 20 minutes a week, you can get and stay physically fit—without ever breaking a sweat. In the privacy of an exercise room reserved just for you and your dedicated personal trainer, you work out on six, specially-designed machines. Slowly, you lift and lower weights in 10 second intervals until you can’t lift anymore, then move on to the next station. Within just a few weeks, you see and feel results.

This is Concept 1010—“the future of exercise” in the words of Danish fitness entrepreneur Jorgen Albrechtsen. It’s a novel approach to becoming fit that he developed based on decades of research on lower back pain—and his own experiences working with inventor Arthur Jones, founder of Nautilus equipment and high-intensity exercise. A global company with centers in Denmark, Malaysia, New Zealand, Dubai and Saudi Arabia, Concept 10 10 is just beginning to expand in the U.S.

Albrechtsen runs one flourishing Concept 10 10 center in Naples, Fla., and is now licensing his fitness model to exercise centers in other Florida locations as well as in Milwaukee, and soon several other bigger cities.. “This is revolutionary.” Our training has one aim—to give you the best results in the least amount of time,” says Albrechtsen,  who  founded Concept 10 10 a decade ago in Copenhagen. (The 10 10 refers to ten seconds lifting and ten seconds lowering weights.)  “It’s a very interesting business opportunity,” he adds. “You have to do something very wrong not to make money.”

In a fitness industry saturated with health clubs, boot camps, and trainers, Concept 10 10 stands out. Apart from its convenience and personal attention to members, the exercise program has been shown to eliminate or greatly reduce lower back pain while strengthening muscles and improving overall fitness. The exercise machines were designed and customized by MedX, an Ocala, Fla.-based company created by Jones.

Just 20 minutes a week of Concept 10 10 is enough because the workout is concentrated and intense, and the body needs time to recover between sessions, Albrechtsen says. It’s not necessary to spend hours a week running or doing aerobic exercise in a gym.  Muscular strengthening provides the best cardio workout, without straining or damaging joints. The body perceives all forms of exercise as an attack. The body thinks “If I am going to be attacked again, I better prepare and get more strong and fit”. To repeat something  that is already easy will not make any dramatic changes to your body or fitness level”. “Too much of a good thing can kill you,” he says.  In fact, Albrechtsen contends that the fitness industry has “lied to people” by pushing the idea of exercise as a fun, social activity rather than a necessary task, like showering.

Don’t expect to be entertained at Concept 10 10. There’s no music or juice bar. The equipment is set up for each member before they arrive and they do the workout with complete supervision from their trainer, from beginning to end, always.

Because fans and air conditioners keep the air cool, members can leave right after they are done, keeping the time spent short, as there is no need to shower etc.

Despite the lack of glitz (or maybe because of it), Concept 10 10 members and licensees applaud Albrechtsen’s approach. “I am 56 [years old]. When I started, I wasn’t in good shape. I never worked out before—I never did go to a gym,” says Ed Vanderploeg, owner of a fire safety business in Naples. In the year since he started at Naples Concept 10 10, he has dropped 30 pounds and now lifts 100 pounds more than he could when he started. “People see me now and say, ‘Wow—you look good.’ And nobody believes it just takes 20 minutes a week.”

Rodd Higgins, a fitness trainer in Milwaukee, Wis., learned about Concept 10 10 from friends of his parents who worked out at the Naples center. After researching the opportunity, he opened his own Concept 10 10 under license in Milwaukee in early October.  “The fitness industry has gone so crazy with everyone looking for the magic pill. This is back to basics. It’s a very convenient, effective, high-intensity workout,” Higgins says. He budgeted $200,000 for startup costs, including the equipment, licensing fee, and other costs. (A center can open for as little as $140,000 in investment, Albrechtsen says.)

Higgins broke even with 85 members—mostly baby-boomers, retirees, and young professionals–in a few  months. Members spend as little as $35 a session, depending on how many they pay for in advance.   “We can help the 70% of the market place who don’t like to go to a huge 10,000-to-15,000-foot gym. They get intimidated and don’t get a good workout,” he says.

With  a handful of centers so far in the U.S. Albrechtsen says there is plenty of room for growth. He has come a long way since he first opened karate schools in Denmark in the 1970s and Nautilus centers in the 1980s. “Our aim is to become the Starbucks of exercise,” he says.

Share
Previous Nanny Granny – Back on Track – Gloria Schoenfeld’s Story Patient Testimonial for Dr. Gino Sedillo at CardioVascular Solutions Institute
Next OPEN ENROLLMENT IS OVER! OR IS IT???