The following story is an example of a child being bullied by his teacher: 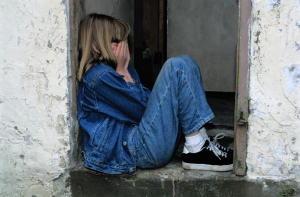 Aconcerned mother emailed her son’s teacher to see if the teacher would be willing to allow the child to have a little more time to complete an assignment. The child wasn’t doing well in this particular class, and unfortunately he had been under an extreme amount of stress recently. Just a year and a half ago, he had lost his older sister whom he was very close to, suddenly. Over the last six months, this same child was going up see his father in the hospital nearly every single night. His father has advanced diabetes and had an infected surgical leg wound that was complicated by a blood stream infection, endocarditis, kidney failure to the point of confinement to dialysis, cardiac arrest with successful CPR, a hemorrhagic stroke, and throughout this whole ordeal, the constant threat of amputation of that infected leg. The next day when the child went to school this very same teacher had the detailed email up on the overhead projector and the whole class saw it. The child raised his hand to let his teacher know (giving her the benefit of the doubt that possibly she didn’t realize it was up there), and the teacher told the child to be quiet and said “No wonder your mother needs to email me, because you have such bad attitude”, again in front of the whole class.

A recent study published by Stuart Twemlow, MD, in The International Journal of Social Psychiatry indicates that the problem of teacher bullying is much more commonplace than we would ever expect. Dr. Twemlow, a psychiatrist who directs the Peaceful Schools and Communities Project at the Menninger Clinic in Houston defines teacher bullying as “using power to punish, manipulate, or disparage a student beyond what would be a reasonable disciplinary procedure.” In his study, Dr. Twemlow conducted an anonymous survey of 116 teachers at seven elementary schools. Results showed that more than 70% of teachers said they believed that bullying was isolated, but 45% (52 teachers) admitted to having bullied a student. This shocking statistic is just under half of the participants in this study.

According to the American Society for the Prevention of Cruelty to Children (ASPCC), it is reported that 6 out of 10 American youths witness bullying at least once a day. Another study by Alan McEvoy from Wittenberg University, in Ohio, points out that “Students who are bullied by teachers typically experience confusion, anger, fear, self-doubt, and profound concerns about their academic and social competencies. Not knowing why he or she has been targeted, or what one must do to end the bullying, may well be among the most personally distressing aspects of being singled out and treated unfairly. Over time, especially if no one in authority intervenes, the target may come to blame him or herself for the abuse and thus feel a pervasive sense of helplessness and worthlessness.” Obviously this form of violence needs to stop.

There are some programs out there to help and support these victims. The DOSOMETHING.ORG Bully Project gives kids information to educate themselves, resources for them to go, and advice for how they can speak up for themselves and others. Stopbullying.gov is an excellent resource provided by our federal government that teaches victims, and their loved ones, how to prevent future violence, how to react when it does occur, and how to rectify the situation to solve the problem.

Share
Previous Knee Pain: Does It Mean a Knee Replacement?
Next Why Immunize?