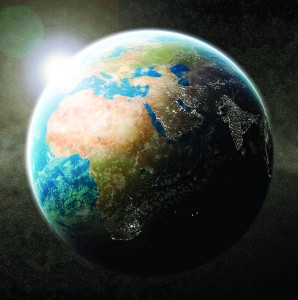 At 5:39 a.m. on December 7th, 1972, Apollo 17 took a picture from 28,000 miles up. It revealed nearly the entire coastline of Africa and West Asia. Although this image would be officially titled “AS17-148-22727,” due to its appearance and size, it would be referred to as The Blue Marble, and marked the first time humanity could see itself at such a scale. Its release changed the way we saw our universe, and more importantly, our place within it.

Recently, a similar discovery has been made; a discovery in stem cell therapy that has the capacity to fundamentally change the way we see lung disease forever.

More than 600 million people suffer from chronic obstructive pulmonary disease (COPD) worldwide, and that number is expected to rise. An incurable disease, COPD is often fatal, with treatment options generally limited to inhalers that alleviate symptoms, but fail to promote healing in the lungs themselves.

Though the Space Race is over, scientific discovery marches on. Modern biotechnology seeks to harness the smallest systems in the human body – our cells. The medical community has been turned upside down with the breakthrough of stem cell therapy. With this newfound push in regenerative medicine, the Lung Institute (lunginstitute.com) – specializing in treating lung disease – has established itself as a leading figure by publishing the first white paper of its kind. In a field where information of this scope (encompassing a total of 100 patients) has never been seen, this is a remarkable first.

The significance of the study may shine a light on COPD and our understanding of how to combat the disease.  Where there was once a lack of published work showing the effects of stem cell therapy on COPD, the Lung Institute has broken new ground with its findings. After testing approximately 100 patients, they discovered that within three months of treatment, 84 percent of patients found their quality of life had improved. The average improvement for the group was 35 percent. Additionally, 48 percent of the 25 patients tested for pulmonary function saw an increase of over 10 percent, with an average improvement of 16 percent over their pre-treatment test results.

This discovery could change lives significantly. For millions of people suffering from COPD, a natural decline in pulmonary health is a harsh reality. For many, oxygen tanks and inhalers have become a common burden as their quality of life gradually slips away. Based on these results, stem cell therapy could be the answer they’ve been looking for.

Through a single image we were awed by the beauty of the world we inhabit and connected by our shared humanity. The Blue Marble and the discovery it represented were unlike anything experienced before – a picture of clarity where there was once only darkness.

Within only a few years, stem cell therapy has established itself as an alternative form of treatment for COPD. As a result of this research, stem cell therapy may be able to meaningfully change the quality of life for those suffering from COPD. As The Blue Marble before it, this revelation of new data may represent the dawning of a new age in medicine, a renewed perspective on health and a new approach to confronting COPD. In a world where change means progress, this could be a remarkable discovery benefitting not only future generations, but ours as well.