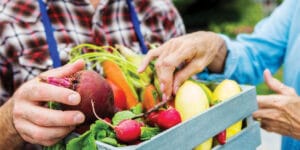 When we think of bad sugars, most of us conjure up the images of fast carbs – the ones that send blood sugar soaring-like bagels, cookies, and white bread. While these will surely pack on pounds, there are some important truths about carbohydrates in general. They are essential for peak energy and brainpower, since the glucose they are converted to is the preferred form of fuel for the body and the brain.

And why is it a preferred source of energy? Because it is the fastest! Unfortunately though, the fast carbs we tend to turn to have a high glycemic impact. This means that they will flood the bloodstream with glucose (sugar) triggering a rapid insulin peak, which fosters fat storage. It makes sense: we don’t need all that much sugar for energy, so insulin will move some of it into the liver and some into the muscle for storage as glycogen, and the rest will be stored as a fat. Some common examples of high GI sugars: white bread, white rice, corn flakes, cookies, and candy.

The analogy I used in my book “Diet Slave No More!” is: “As sugars rapidly enter our bloodstream, the liver “policeman” calls upon his partner pancreas to release a “police dog” called insulin – and together they all go to work, trying to clear “the streets” of blood vessel from all the sugar floating in there.

Sugar criminals that cannot be caught and cuffed as glycogen – turn to fat deposits.

This explains why people whose diets are highest in fast sugars are also the most obese. Moreover, a study published in The Lancet, a reputable British medical journal, found that a diet rich in fast carbs doubled body fat storage. This redundant fat storage happens to be very dangerous for people with fatty liver. This is a very common condition in which a person does not have any symptoms, but on a routine blood test the doctor discovers that the liver numbers are off and the ultrasound of the liver shows extensive fatty deposits. Over the course of time, this condition could lead to liver cancer. So, you can see how everything is interconnected and how loading yourself with cookies can lead to unexpected nasty issues over the years.

In addition to harmful fat deposits, fast sugar with its powerful insulin peaks causes a subsequent steep drop of blood sugar below normal levels. Such dips result in mood swings and appetite spikes. This of course fuels a cycle that makes overeating inevitable. Studies show that people, who eat meals high in fast carbs, eat way too much food over the next 5 hours – about 82% more than average.

Another downside to fast (high Glycemic Index) sugar foods, which is very relevant for today’s world – is that a sugar overload creates a high oxidative stress on the body. To put it simply, when the body’s resources are being used up on sugar utilization and “clearing up the streets of arteries” – the person is actually at highest risk from having viruses like Coronavirus wreak havoc on their immune system, cardiovascular integrity – and lead to poor clinical outcomes.

But I don’t mean to give sugar a bad name. I don’t like extremes. In fact, people who steer clear of sugars entirely, hoping to burn their inner fat stores – a so-called ketogenic diet – end up in another trap. When energy derived from sugar is in short supply, the body starts consuming lean muscle as a fuel long before it will tap into the fat as energy source. Do you really want to start losing your muscles on a ketogenic diet? I didn’t think so. I saw a study in which subjects whose carbs consumption was extremely low, lost an average of 32% of lean tissue in 12 weeks! And the body is not stupid: when it senses how the muscle gets “cannibalized” by ketogenic diet, it slows down its metabolism altogether. This is what I described in my book as a “Starvation mode” – an energy-conserving state which can slow your metabolism by 40%. And since carbohydrate deprivation robs the brain of the sugar needed for peak performance on the go, you are guaranteed to have brain fog and inability to focus.

Avoiding the high glycemic index and processed foods, and eating smaller portions frequently – will help avoid the extremes and steer your metabolism in the golden middle.

Share
Previous Male Infertility A Brief Overview
Next Movement Matters: What You Can Do For Your Big Toe Arthritis