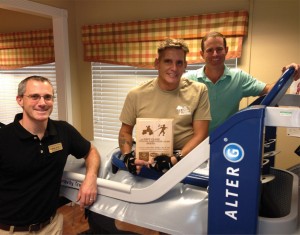 Albert “Tony” Almeida has had a long road to recovery after being shot twice by a former co-worker, but the AlterG® Anti-Gravity Treadmill® designed by NASA has been instrumental in his treatment.

On May 15, 2010, Almeida was attacked, shackled and gagged as he worked his job as concierge at the Inn at Bonita Springs. The assailant was a former employee who had recently been fired. When he left Almeida alone for a minute to rummage through offices, Almeida made a desperate attempt to escape. His efforts were answered with two gunshot wounds.

The drama ended with the attacker dead after a police chase. Thankfully, no one else was hurt, but Almeida’s life has not been the same since.

“For the past three years, I have been in and out of therapeutic centers small, big and medium,” Almeida shared.

In May 2012, he began outpatient physical and occupational therapies at Life Care Center of Estero. His goal? To regain as much independence as possible.

It would be no small feat. When Almeida started rehab sessions at the facility, his legs were extremely weak, which meant he relied on crutches that attached to his forearms, and he could only stand up for two minutes at a time.

Two to three days a week, Almeida worked with the therapists to regain strength and a normal walking gait, as well as adjusting his medication to lower the pain and allow him better mobility.
One of the tools the team used was the AlterG® Anti-Gravity Treadmill®.

Designed by NASA, the AlterG® machine looks like a regular treadmill with a bubble-like enclosure from the waist down, which the user zips up to create the reduced-gravity environment. Up to 80 percent of the person’s weight can be relieved, reducing impact and injury when walking and running.

“It was the most incredible piece of equipment for my rehab,” Almeida remembered. “My first walk was at 20-percent weight bearing, and I struggled to walk 7 minutes. It was an awesome realization two months later to walk well at 50- to 60-percent weight bearing in the treadmill for more than 30 minutes! I started crying, reflecting on how in the past I was so limited with my walking, and I was overwhelmed with happiness from seeing the progress.” Paul Burns, a physical therapist who worked with Almeida, shared, “The AlterG® allowed Tony to be in a safe environment to practice coordinated movement with his legs. Tony is now able to walk functional distances at home with options of using his crutches or walker, can stand more than 19 minutes for home tasks, has less leg pain and is independent with his home exercise program.”

In May 2013, Almeida met his goals and “graduated” from the rehab program.

“A lot of my progress has to do with the staff – the way they work cohesively together and the way they treat each other, which overflows to the patients,” said Almeida. “When I discharged from therapy, I knew I would miss the staff and equipment, but I feel comfortable and confident in my home exercise program.”

May was a banner month for Almeida for another reason. He received the Dave Clark Foundation’s Pulling Each Other Along Award, recognizing his contributions to the community in cofounding the Southwest Florida Spinal Cord Injury Support Group.

For more information about the AlterG®, or about rehabilitation services at Life Care Center of Estero in general, please call (239) 495-4046.

Life Care Center of Estero, located at 3850 Williams Road, is one of 21 skilled nursing and rehabilitation facilities in Florida managed or operated by Life Care Centers of America.