Rise of the Machine at Charlotte Regional Medical Center

The patient: male. Age: early 50s. The problem: a cancerous growth that had wrapped its tentacles around his otherwise healthy lower intestine. The prognosis: surgical removal of the entire colon, a long hospital stay, an even longer recovery. At least, that was the plan – short of a miracle. 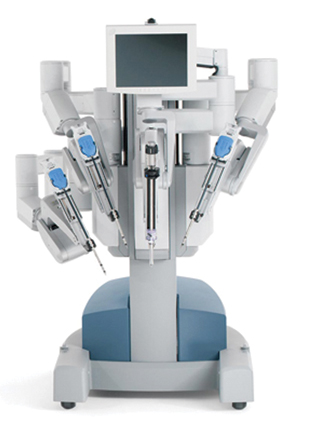 That miracle came, framed in metal and equipped with the kind of front-line technology that’s changing the lives of patients worldwide. The miracle is called the da Vinci Surgical System. And with it, robotic surgery has turned a corner here, with the advent of an assisted colon resection – the first such surgery to be successfully accomplished in Charlotte County.

Performed in early February by Dr. Alvaro Bada at Punta Gorda’s Charlotte Regional Medical Center (CRMC), the procedure would have had a far more dramatic result with traditional surgery. Because the entire colon would have been removed, the patient would have also needed a colostomy, rerouting the intestine to allow stool to drain into a bag – for the rest of his life. Not so with Intuitive Surgical’s da Vinci.

Bada was able to remove the cancerous tissue from the internal organs without having to remove the organs themselves. For some patients, this is nothing short of a medical miracle. “This is just incredible,” said Deb Keller, RN, who was part of the surgical team. “With a colostomy, the patient would never have been ‘normal’ again.” This, say CRMC surgeons and staff members, is the tip of the iceberg of uses for the state-of-the-art da Vinci.

Anatomy of a robot

Using the latest technology, the da Vinci has become the most famous robotic surgery apparatus in the world. In international circles, it is being lauded as one of the most important advancements in modern surgery.

But quality is expensive – and the da Vinci is no exception. With a $1 million price tag, it has still been a worthwhile investment for CRMC, which remains the only hospital in the county with the machine. Making its debut in May of last year, the da Vinci quickly awed surgeons, staff and the public alike at an open house, where attendees had an opportunity to experiment with the system. Users found the tiny robotic arms precise enough to handle flower petals and peel grapes.

The da Vinci consists of three integrated components: a console at which the surgeon can sit while performing the procedure, a patient-side cart with four robotic arms and a video tower with a large monitor so that the entire operating room staff can witness the surgery. The robotic arms – the centerpiece of the system – are each equipped with an endoscopic camera that transmits a high definition 3D image of the surgical site. This classifies the da Vinci as a telesurgical device, since the surgeon does not operate the arms directly.

Instead, he or she sits at the console and manipulates a set of controls. The da Vinci translates the surgeon’s hand, wrist and finger movements into precise movements of the miniaturized instruments on the tip of the robotic arms. The arms allow a greater range of motion and dexterity than the human hand and wrist. And a feature known as “motion scaling” allows the surgeon to adjust the sensitivity of his hand movements to the corresponding micro-movements of the instruments.

In addition, the system relays some force feedback sensations to substitute for sensations of pressure the surgeon would receive if using surgical instruments with his or her own hands. However, the da Vinci is incapable of being programmed to make movements on its own. It is totally dependent on the directions relayed from the surgeon’s console.

“With the magnification of the camera, we can do more precise surgeries,” Bada said. “The resolution on the monitor is amazing,” Keller added. “It’s like the difference between watching a movie on a regular screen and watching it in high definition. Every little part of the image is so clear with the da Vinci.”

For surgeons having to work in tight quarters within the human body, this is medical technology at its most practical.

“Human hands are pretty big compared to the areas we sometimes have to work in,” Bada said. “When you’re you’re working in a small cavity in the pelvis, the robotic arms make it a lot easier.” In addition, the system virtually ensures less pain, less bleeding, a quicker return to normal bowel function, and a faster return to diet, among other advantages. “Usually the hospital stay would be about six days,” Bada said. “With the da Vinci, we can cut that into about half.”

One of the biggest benefits is the lack of scarring from large incisions. The robotic arms are only about the thickness of a pencil, so the marks they leave are less obvious to the eye and also heal more quickly. “Some procedures take more time in the operating room,” said certified surgical technologist Julie Miller,” but it’s a worthwhile trade-off because there’s less tugging and less pain in the end. The patient gets to go home and gets back to normal a lot faster. That’s important. None of us likes to be sick.”

For the surgical teams, getting acclimated to the da Vinci has been a learning process. According to Keller, the surgical staff continues an intensive training regimen to get more accomplished in using the da Vinci. This includes observations of procedures at other medical facilities, conversing with company representatives, online training, discussing procedures with proctoring physicians who visit CRMC, company manuals detailing the different medical procedures, and the staff’s own research. The goal, Bada said, is to use the da Vinci in other surgical procedures not yet being performed. “The physicians are trying to start a multi-surgery program here,” he said.

“There will be more and different types of surgeries to follow.” Urologist Dr. Arvind Sharma has noted that physicians at CRMC have already been preparing to perform more complicated surgery on kidneys Keller has already been involved with numerous procedures, including hysterectomies and prostate surgeries with the da Vinci. “Soon we’ll be introducing single-site surgery,” Keller said, “where we can perform a procedure using a single incision, such as with the removal of a gall bladder. We’ll also have medications we can inject that use fluorescence to differentiate between healthy tissue and diseased tissue. It will be like giving the surgeon a road map.”