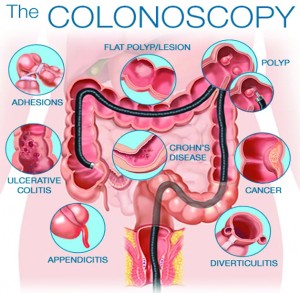 Colorectal cancer is the third leading cause of cancer-related deaths in the United States when men and women are considered separately, and the second leading cause when both sexes are combined.

Regular colorectal cancer screening or testing is one of the most powerful weapons for preventing colorectal cancer. Screening is the process of looking for cancer in people who have no symptoms of the disease.

From the time the first abnormal cells start to grow into polyps, it usually takes about 10 years for them to develop into colorectal cancer. Regular screening can, in many cases, prevent colorectal cancer altogether. This is because some polyps, or growths, can be found and removed before they have the chance to turn into cancer. Screening can also result in finding colorectal cancer early, when it is highly curable.

People who have no identified risk factors (other than age) should begin regular screening at age 50. Those who have a family history or other risk factors for colorectal polyps or cancer should talk with their doctor about starting screening when they are younger and/or getting screened more frequently.

Most of the time, we give little thought to the idea that we may be setting ourselves up for colon cancer. In fact, most people don’t think about colon cancer until they either have it or someone they love has it.

As with any other illness or disease, it is ideal to prevent it instead of waiting to do anything until you actually have it. Prevention is easier than curing a problem. The first step in prevention is to get regular colon screenings. In many cases, there are no warning signs; finding and removing polyps early helps to prevent late stages of colon cancer. When colon cancer is detected early, it is the most curable form of cancer that there is.

For more infromation about colon cancer and would like to schedule an appointment to meet with one of our physicians, please contact our office at (239) 593-6201 or send an email with the subject “Colon Cancer” to gastro@gispswfl.com.