Prostate Cancer – Getting to the Heart of the Matter. 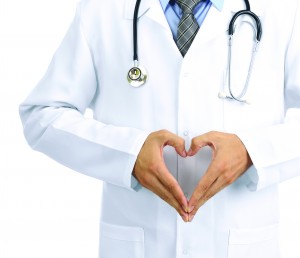 It’s February – heart month, Valentine’s Day and coincidentally Cancer Prevention Month.  While some cancers can be prevented, such as many skin cancers and lung, throat and mouth cancers, the cancer I address has not been found to be preventable.  This is prostate cancer.  The only way I know to prevent this cancer is to be born female!

That said I am climbing back onto my soapbox to remind and encourage men to get screened annually for prostate cancer.

If either the PSA blood test or the digital rectal exam is “abnormal,” one of two things may follow.  The physician may prescribe antibiotics to rule out an infection in the prostate gland (prostatitis), or he may recommend a biopsy.

It seems that the word “biopsy” sets off a powerful reaction in men.  Granted, a biopsy is not something to be taken lightly, but it is the only way to diagnose any cancer.  A small sample of tissue must be removed and analyzed under a microscope by a pathologist to determine if cancer is present.  Of course you cannot begin treatment to defeat the cancer until you know you have it.

I think of the biopsy as the heart of one’s prostate cancer journey.  If your doctor recommends a biopsy, more than likely you need to have one.  It is this step that should give you vital information to determine your next steps.

Today the routine procedure for a prostate biopsy is a random sample procedure, where the physician removes tiny “cores” from predetermined areas within the gland.  These cores are taken randomly from the top, bottom, front, back and sides of the gland, totaling 6, 8 or maybe 12 samples.

The fault with this approach is that the pathologist can only determine what is seen in those tiny cores, and not what is evident throughout the rest of the gland.  This type of random sample biopsy runs a high probability of producing a false negative report – meaning simply that none of the cores contained cancer cells, while active cancer growth was occurring elsewhere in the gland.

The patient will not know that this was a “false negative” until follow up PSA tests reveal a climbing PSA, or other symptoms appear.  At that time the physician will most likely recommend a 2nd biopsy, usually a repeat random sample method.

Is there a better biopsy method?  Yes there is, but our system of pre-emptive medicine (dictated by the insurance industry) usually requires at least two random sample negative biopsies followed by rising PSAs before they will reimburse for a different type biopsy.  Unless the patient is willing to pay-out-of-pocket for the “better” biopsy, he is stuck (no pun intended!) with the usual, random sample method.

Great progress is being made with new imaging technologies that actually detect areas of suspicion within the gland prior to the biopsy that can serve as targets for the cores, rather than merely sampling at random.

One of these promising methods is the color-flow Doppler ultrasound guided biopsy, available at the Dattoli Cancer Center & Brachytherapy Research Institute in Sarasota, FL.  Utilizing an advanced ultrasound device which converts sound waves created by abnormal blood flow into colors on the ultrasound image, this scan produces distinct targets for the biopsy physician.   An abstract detailing the benefits of this type of biopsy is being presented by Dr. Michael Dattoli at the prestigious American Society for Clinical Oncology – Genitourinary Section annual meeting at the end of February.

Until there is a major shift in insurance reimbursement policy, the cost of this more accurate biopsy method is borne by the patient.  The color-flow Doppler ultrasound guided biopsy is performed in the hospital, under anesthesia.  The biggest portion of the cost comes from using the hospital operating room; a much smaller portion is Dr. Dattoli’s fee.  Readers who may be interested in learning more about this type of biopsy are invited to call us for details.

The bottom line, or “heart” of this message is that an accurate biopsy is critical for diagnosing prostate cancer early when it is most easily tackled.  While giving the man a false sense of security, the abundant false negatives seen today are only prolonging the time before an accurate diagnosis, giving the cancer time to grow and escape the gland.  Once this has happened, treating the cancer with intent to cure takes on a whole new, much more difficult dimension.

Advice to men who are considering a first biopsy:  look your doctor in the eye and tell him you understand the possible failings of the random sample biopsy.  Tell him you request at least 12 cores – and possibly more – in hopes that if you have prostate cancer it can be found now!

The Dattoli Cancer Foundation offers a booklet about prostate biopsies.  Call 941-365-5599 to request a copy.