What Exactly Is Omega-3? 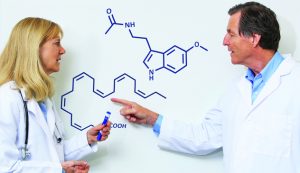 When I started giving lectures about omega-3 for physicians 15 years ago, few health care providers had heard about these molecules.

Some doctors thought I was preaching voodoo medicine, while others politely thanked me for sharing the information.

Today, the situation is quite different. The majority of Americans have heard about omega-3 and know that it is good for your health. Still, most people’s knowledge of omega-3 is limited, even among health professionals.

Let’s start with the essentials:

Omega-3: A Family of Fat Molecules
Omega-3 is a family of at least 11 different fat molecules. You may have heard of the key family members, including EPA, DHA, and ALA omega-3s. Each member of the molecule group has a unique structure and function. But they all feature a carboxyl group (COOH) at one end of the molecule and are characterized by extreme flexibility.

Due to their multiple double bonds, these long-chained molecules can twist and change their spatial structure in a fraction of a second, depending on the closeness and interaction with other molecules. This flexibility is crucial for the omega-3s to fulfill one of their primary roles in the body – helping maintain a well-­functioning cell membrane.

Omega-3s in the Cell Membrane
Omega-3 fatty acids act as gate­keepers to the cell and regulate the passage of both nutrients and waste products across the membrane. Moreover, omega­-3s promote signaling between cells by providing the structure and connection to cell membrane receptors. These receptors sit like parts to a jigsaw puzzle on the surface of the cell membrane, waiting for particular hormones and metabolites to lock in place.

Now imagine what happens to the cell when you remove omega-3s from the equation and replace them with trans and saturated fats. The cell membrane stiffens, preventing good nutrient exchange. You could almost say the cells become starved from the lack the omega-3s. As for the receptors, they no longer have a place in the cell membrane. Instead, like a dilapidated house, you end up with a membrane that’s full of holes and barred windows and doors.

Unfortunately, this is the case for most people who don’t eat fatty fish regularly or take effective doses of omega-3 supplements. And as some researchers have speculated, long term omega-3 deficiency has serious consequences. One Harvard study speculated that omega-3 deficiency could account for some 96,000 deaths every year.

There’s another point to remember in this discussion too: Omega-3 is such an important part of the cell’s metabolism that the molecules are consumed relatively quickly.

Unlike minerals, such as calcium, which typically stay in the bone for a relatively long time, the cells need a regular supply of omega-3. This explains why it’s important to get a certain amount of omega-3 every day for optimal cell functioning.

First and foremost, the omega-3s balance the pro-inflammatory omega-6s, which are found in most vegetable oils and all our processed foods. While we need a certain amount of omega-6s in our diet, consuming excessive amounts of omega-6 creates havoc. The consequence of getting too much omega-6? Swelling, pain and loss of joint functioning – all marks of inflammation. Long term, that chronic inflammation fuels the fire for chronic diseases, like Alzheimer’s, arthritis, heart disease and even certain types of cancer.

Researchers have also discovered that the EPA and DHA omega-3s create the building blocks for new metabolites that have the ability to stop ongoing inflammation, especially in the brain. Several pharmaceutical companies are now focusing their research on these newly discovered metabolites with the hope of turning them into patented medicines. But there is one problem connected to this approach. Each of the members of the omega-3 family produces a multitude of active metabolites that create a balanced physiological response. By singling out just one of the molecules, the pharmaceutical companies could potentially disrupt the omega-3 family’s beautifully synchronized cascade of health benefits. This is precisely why I am passionate about full-spectrum fish oil, which delivers not just one omega-3 molecule, but a range of naturally occurring fatty acids.

Other Ways Omega-3 Works in the Body
Scientists have also suggested several other ways that omega-3 fatty acids make a difference for our health.

Some scientists, for instance, believe that a main function of omega-3 is to protect the cholesterol in the body from oxidation. By being in position to be oxidized first, the omega-3s let the cholesterol remain in its pure, unadulterated state, thus preventing the buildup of plaque in the arteries. It’s important to note, however: If the omega-3 molecules are already oxidized/rancid, they are not be able to serve this function.

Another theory centers on the omega-3s role in manipulating gene expression, or determining which genes are expressed and which genes remain dormant. Precisely how omega-3 works in regulating gene expression, we do not know yet. But two hypotheses on the table suggest that 1) the omega-3 molecules either directly interact with certain genes or that 2) the omega-3 molecules interact with other substances that in turn trigger certain genes and impact gene expression. Hopefully, more research on this fascinating topic will come soon.

Finally, the omega-3s also interact with enzymes in the liver to help reduce triglycerides. But we’ll save that topic for another article.

Fresh, Full-Spectrum, Full Dose
Looking at the many functions of the omega-3 fatty acids, we start to understand why it’s important to be concerned about how much omega-3 we consume and what kind of quality we are getting.

If you do not get an adequate dose every day, the omega-3s will not be able to carry out their basic functions in the cell membrane or compete with the plethora of omega-6. If we consume oxidized, rancid oil, the omega-3s will not be able to work properly. And if we get just one type of omega-3, rather than full spectrum of the omega-3 family, we lose the multitude of benefits that come from the different fatty acid and metabolite interactions.

If you are not sure you are getting the full benefits from your omega-3 supplement, ask yourself: Is this fresh? Is this full-spectrum? Am I taking enough every day?

Share
Previous Collier County Take Heart: The most advanced non-invasive nuclear stress test of the heart has arrived–Cardiac PET!
Next A Comprehensive Approach to Treating Endometriosis