Nurses Making a Difference in our Community 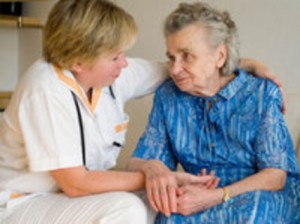 Sarasota Florida is home to a large community of talented circus performers dating back to the 1930’s the early days of the world famous Ringling Bros Circus. On July 15th 2011 a very special referral came through our doors at Infinity. A former circus performer 50 years ago became a paraplegic after a traumatic and life changing fall from the tight rope. Since then he has circulated throughout many different home care agencies and now with Infinity. His wife a former nurse who suffers from her own health problems was very apprehensive and untrusting of our community’s health care.

For about two years, this patient had suffered with two stage 4 pressure ulcers on both of his heels and also one a stage 3 pressure ulcer on his coccyx. The treatment started with a wound vac for about 5 months. Unfortunately, it wasn’t helping improve the wound. Our experienced wound care nurses were in close communication with the doctors at the wound care center, with perseverance they continued wound care as per the doctor’s order even though there was not much progress being made. But Carolyn Oliver and Lorri Guy did not give up! They continued to be a patient advocate.

Little did they know that their suggested wound care would be the right compound for healing! This is when the close relationship began with the patient, spouse and the team of doctors. Carolyn Oliver and Lorri Guy had broken the threshold and now were able to be taken seriously. They remained positive throughout the long and sometime unbearable task of caring for the pressure ulcers! The finally started seeing a dramatic change in the wound.  It was beginning to significantly heal.

The spouse now started taking pride in her house. She began cleaning again. The patient started to have better hygiene too! Finally the most important moment happened, his wounds were healed! What other agencies could not do in two years our wonderful Infinity nurses did in just 3 months!

Port Charlotte
This occurred about 6 months ago but when I heard this story about Heather Henderson I have not been able to forget it.

Heather was driving to softball practice with her kids when she saw a woman frantically get out of her car in traffic with her small baby.  Heather said that she could tell by the look on the mothers face that there was something wrong.  Heather stopped and ran towards the woman, identifying herself as a nurse.  The woman thrust her baby at Heather.  Heather said the baby was choking and blue. She reached into the tiny mouth and was able to dislodge a piece of plastic to clear the baby’s airway.  She handed the baby back to her mother, got into her car, and went to softball practice.

There are many things about this story that have stuck with me.  The fact that Heather was not too busy with her own life to see that this mother was in trouble is just one of the things that is remarkable about Heather. She helped without recognition or much outward appreciation and in fact played down that anyone would have done that.  I’m not so sure.  I think she is special.

Share
Previous When a Headache is More than Just a Headache
Next Realtive Temporary Custody and Adoption: