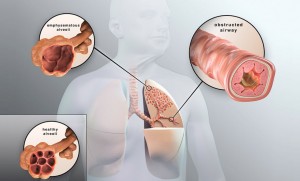 Chronic Obstructive Pulmonary Disease, commonly referred to as COPD, is a serious lung disease that affects many people. Although smoking is the #1 cause of COPD, you don’t have to be an active smoker or have a history of smoking to have COPD. Prolonged exposure to harsh chemicals or toxins can put you at risk for COPD, and genetics may increase some people’s chance of developing the disease.

COPD is usually progressive, meaning your airways become increasingly narrowed or blocked over time, making it harder for you to breathe.

Some Symptoms of COPD May Include:
•    Shortness of breath
•    Wheezing
•    Chronic cough with mucus
•    A feeling of tightness in the chest

Although sometimes confused with asthma, it is not they are not the same. It is important to realize that COPD is not just a temporary breathing problem, even though there are various treatment protocols to minimize the symptoms, it cannot be cured.

COPD Can Include Chronic Bronchitis,
Emphysema, or Both.
Chronic bronchitis is long-term inflammation that can cause narrowing of the airways in your lungs. This limits airflow in and out of your lungs, which makes it hard to breathe. Unlike the bronchitis you may experience with a common cold or other virus, chronic bronchitis can come and go over months or years.

Inflammation causes the air sacs to become damaged and break down. This damage decreases the elasticity of the air sacs. Think of an old balloon that is no longer stretchy and loses its shape. Old air gets trapped inside the air sacs, so there is less room for new air to get in, making it difficult to breathe.

COPD also includes episodes called flare-ups (also known as exacerbations), when you may develop new symptoms or feel your usual symptoms worsen. As time goes by, you may feel fatigued or experience more frequent flare-ups. Each new flare-up can increase your risk of having another flare-up in the future. COPD flare-ups can be unpleasant and may, in some cases, result in hospitalization.

If you’re having trouble breathing, it is important to get screened as soon as breathing becomes a challenge to slow down or stop the progression of the disease.

Did You Know?
Chronic obstructive pulmonary disease is the 3rd leading cause of death in the United States. The disease kills more than 120,000 Americans each year—that’s 1 death every 4 minutes—and causes serious, long-term disability. The number of people with COPD is increasing. More than 12 million people are diagnosed with COPD and an additional 12 million likely have the disease and don’t even know it. Here are 4 things YOU can do to live a longer, more active life.
. Be aware of the risk factors
. Recognize the symptoms
. Ask your doctor or health care provider about a simple breathing test
. Follow treatment advice