NO MUSCLE? NO SWEAT

– By Kelly Farrell, Special to the Daily News – 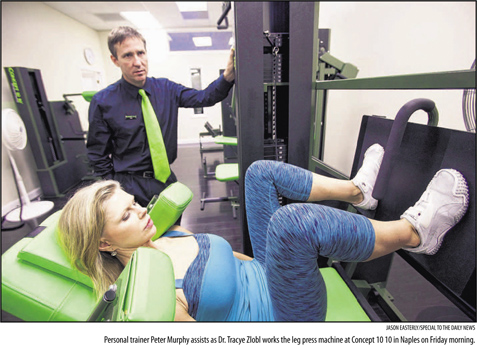 It’s a curious concept: a workout regimen touting that you can get fit by commiting to as  little as 20 minutes a week.

You’re not dripping with sweat. You haven’t done traditional cardio work and no stretching is required. No warm up. No cool down.

It’s the results that keep Dr. Tracye Zlobl, OB/GYN, of Naples, coming back, she said.

“Within three weeks of starting I could see a difference in muscle tone,” said Zlobl, who has been working out regularly the majority of her 52 years in life.

“Three months later and difference in muscle tone is phenomenal,” she said.

The lack of sweating, stretching and jogging doesn’t necessarily make it easy.

“This is the hardest, most unpleasant, brutal workout,” said Concept 10 10 owner and founder Jorgen Albrechtsen.

“We know that’s a great selling point, but it also raises a lot of skepticism,” said Albrechtsen.

“People find it difficult to believe 20 minutes is sufficient. They often think if something is good, then doing more is better.”

However, 20 minutes, once a week is enough – sometimes twice a week at the beginning, he said.

“There is nothing like results to have the greatest skeptic convinced,” said Albrechtsen, who invites people to try it out for free without a high pressure sales pitch.

“The pressure is strictly on the body.”

Get ready to shake
Don’t expect to be entertained here. “The notion that exercise should be fun, we don’t agree with at all,” said Albrechtsen, who owns several Concept 10 10 locations around the world and opened the first U.S. location in North Naples in February. “It’s not fun to brush your teeth, to wash your hair, but you have to do it to keep your life together,” he said.

“We make you the best you can be.Work out in the shortest amount of time possible and then enjoy life.”

There are no TVs, no music playing and not much chit chat between trainer and trainee. That’s with good intent, to keep things efficient and the trainee focused on working each muscle group.

“We don’t try to be varied, interesting or fun. We just want to be the solution,” Albrechtsen said.

“If hanging from the ceiling with one eye closed was what gave the best results, we would do it.” The workout includes six exercises on six pieces of equipment with one trainer and one client at a time. The workout can actually be done in less than 20 minutes, with each exercise taking about two minutes as the client does each movement in slow repetitions of 10 seconds forward and 10 seconds back.The machines are adjusted to work the body to the person’s individual level of muscular exhaustion.

Each session or couple of sessions, depending on development, more weight is added to reach that level of fatigue.
The lack of jogging is attractive to many Concept 10 10 clients because jogging is one of the many traditional exercises that damage joints.
Concept 10 10 increases cardiovascular fitness without such risk, Albrechtsen said.

“This is cardio at its best. All serious research indicates increasing your muscle mass and increasing your cardio is totally the same thing. If you’ve increased your muscle mass, you’ve increased your cardio capacity,” he declared.
Concept 10 10 is unique in a lot of others way as well. There are no contracts, no initiation fees and purchased sessions never expire.
The individual clients are as unique as the program. The oldest member of Concept 10 10 is 96 years old, and has artificial hips and knees. It’s the lack of impact that makes her muscle development possible with Concept 10 10.
Clients also include pregnant women, athletes, teenagers and people with various medical histories. Brian Rossi, 70, of Bonita Springs, says he enjoyed greater results in a fraction of the time he spent working out on his own.
“I feel I’ve compressed two hours of a regular gym into 20 minutes. It’s particularly appealing for people on the run,” Rossi said. Clients often come in for a break in their work day. Since they’re not drenched in sweat when they’re done, they’re able to change and head right back to work.
Trainers warn, however, they may return to work a little shaky and trembling for several minutes following their workout.

The experience
So, as I sat near Albrechtsen on a black leather sofa in Concept 10 10, listening to the science and soaking in the idea of working out for just 20 minutes, no sweating, no stretching, no jogging — I occasionally raised an eyebrow as he explained his concept.
“Those really must be selling points,” I said to him, laughing. It was a Concept 10 10 trainer who laughed after Albrechtsen invited me to try it.
I agreed to accept the invitation and then quickly became frightened. “Wait, did you say muscle failure? Am I going to be able to walk? Will I be able to go to boot camp tomorrow?” I asked of the trainer, Jennifer Modzelesky.
She laughed, but warned me, “You may not be able to be as intense as usual (at boot camp).” I went from machine to machine, constantly being reminded to slow down; I just wanted to rush through it.
It’s the slowness of the movements that gives the intensity. “Should I do it twice a week?” I asked. “Probably not,” Modzelesky responded. “It takes time for the body to recover after this level of intensity.”
As I got to about the third or fourth of the six machines I was shaking and quivering, a spasm here, a spasm there. Just as I thought about complaining, about 16 minutes had passed, and it was over.
So, after a few weeks, but no more than two hours total of Concept 10 10 training, it was just as Albrechtsen said it would be. I still don’t look like Angelina Jolie. When I glance in the mirror, the person peering back is still me — a significantly stronger version of me.
Granted, I couldn’t give up fitness boot camp or yoga. So I ran and stretched along the way, too. That’s OK, Albrechtsen said.

Questions answered
What about the other 23 1/2 hours of each day?
Just because Concept 10 10 takes away the risk that other sports can pose from contact and high impact, doesn’t mean people can’t continue the activities they love and still workout at Concept 10 10, Albrechtsen said.
“You’ll just jump higher and hit harder. You don’t have to give anything up to do this. “If you want to risk injury with higher contact, higher impact activities or sports, that’s your choice. You do that because you want to, not because you need to for your health,” he said.

Will you lose weight?
The easiest way to create the calorie deficit you need to lose body fat is to simply avoid putting the extra calories in your mouth in the first place, Albrechtsen said. Even a very modest calorie reduction of 150 calories each day will result in significant fat loss over time.
However, Concept 10 10 doesn’t enforce a diet or take before-and after pictures of clients. If you want to lose weight, eat about 10 percent less than you do now and avoid fast food, Albrechtsen advises. Clients are given more nutritional information to supplement their workout if they desire.

Adding businesses
While there is currently only one location in Southwest Florida, at 12820 U.S. 41 N. in the Lynwood Square Center of North Naples, Albrechtsen expects more to begin popping up across the country.
There are franchises in eight countries and licensing agreements available in the U.S., with costs to open a Concept 10 10 of one’s own for about $200,000 or more.

People can read about the science behind these methods by visiting the website:
concept1010naples.com.

Share
Previous Why Wellness Works
Next Dancing With The Dolphins!