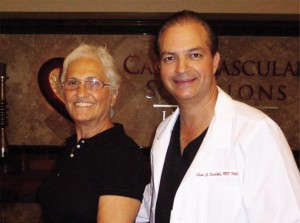 Gloria Schoenfeld went to see her cardiologist because she had been experiencing consistent leg pain. The cardiologist discovered that Gloria had no discernible pulse and determined that surgery was needed to correct the problem. He referred her to a surgeon. “I made an appointment with the referred surgeon, and during my appointment I learned that the procedure I needed was going to be very invasive, have multiple incisions and a long recovery time. This was so upsetting and I was scared of what was to come.”

As luck would have it, Gloria’s daughter attended a birthday party, at which time she explained her mother’s situation to a friend. This friend mentioned that she knew of Dr. Gino Sedillo’s less invasive work and suggested getting a second opinion from Dr. Sedillo. The day after the party, Gloria and her daughter called CardioVascular Solutions Institute and discussed Gloria’s upcoming surgery and the possibility of meeting with Dr. Sedillo to determine if he could perform the less invasive surgery on her. “The staff was able to make me an appointment the very next day. Soon after meeting Dr. Sedillo, I knew that I was going to call the original surgeon and cancel the invasive procedure.” After speaking with Dr. Sedillo, Gloria learned that the surgery she needed didn’t have to be as invasive as she once feared, and the recovery time would be significantly shorter.

Armed with this new information, Gloria chose to have Dr. Sedillo perform the procedure she needed. The procedure, involving several arteries, was performed at Doctors Hospital in Sarasota.

“My recovery was smooth and I noticed improvements in areas that I was not even expecting. For example, I was once again able to get a full night of uninterrupted sleep, without having to use the bathroom a couple times throughout the night. I have to say, that was a unique and nice surprise!”

“I just have so much energy! Dr. Sedillo is a miracle worker. I feel like I’m 10-15 years younger. I have returned to my active lifestyle as a “Nanny Granny” caring daily for my two grandchildren, Aiden and Nadia. Being able to do this is just so important to me in so many ways.” According to Gloria, last summer when she cared for her grandchildren she would always need to rest or nap afterwards. She is looking forward to spending entire days filled with fun events with the grandchildren this summer. Gloria boasted that she recently completed her spring cleaning from windows to cabinets to floors in a record-breaking three days. She excitedly proclaimed that she has so much energy she is a ball of fire and she owes it all to Dr. Sedillo and the surgery he performed.

“Thanks to Dr. Sedillo, I am back to doing all the things I have been unable to do for quite some time. Even my 2 year old golden retriever, Sophie, is having trouble keeping up with me on our 1 1/2 mile morning walk. I have to drag her along on the last 1/2 mile. I LOVE IT!”

Dr. Gino Sedillo, M.D. F.A.C.C.
Dr. Gino Sedillo, M.D. F.A.C.C. Born in Albuquerque, New Mexico, Dr. Sedillo is Board Certified in Internal Medicine, Cardiovascular Diseases and Interventional Cardiology, and has been a member of the American College of Cardiology since 1996. He completed his residency training for Internal Medicine at the University of Texas, where he was voted Intern of the Year and was selected Chief Medical Resident. He completed his Cardiology training at the Texas Heart Institute/ St. Lukes Hospital in Houston, Texas. He was elected Chief Interventional Fellow. Dr. Sedillo received additional specialization in Coronary and Peripheral Vascular Intervention as well as Pacemaker Implantation.

After 15 years of training, Dr. Sedillo started working for the Bradenton Cardiology Center in 1995. While there he performed more than 1,000 procedures per year and he began teaching procedures and techniques to other practicing cardiologists, vascular surgeons, and interventional radiologists. He served as Director of the cardiac catheterization lab at Manatee Memorial Hospital.

Most recently, in May 2011, Dr. Sedillo founded his independent practice, CardioVascular Solutions Institute, with offices in Sarasota and Bradenton. Since then Dr. Sedillo has been named director of the Percutaneous Coronary Intervention program at Doctors Hospital in Sarasota.

When he’s not seeing patients, teaching other physicians or doing clinical research, Sedillo cherishes time with his three children.

Share
Previous THE FRACTURE That May Cause You Stress
Next Hematuria – Refer or Repeat?