May is Melanoma Month—but Melanoma is a Year-Round Concern 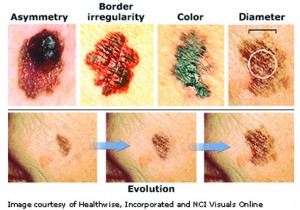 Approximately 350,000 Americans are diagnosed with skin cancer yearly.  About 5% of them are diagnosed with melanoma.  In the United States, one person dies of melanoma every hour.  Melanoma is considered the most deadly form of skin cancer derived from the epidermis, or most superficial layer of the skin, and it is thought to be caused by intense intermittent exposure to ultraviolet radiation.   Some people are more prone to developing melanoma than others.  While early diagnosis is ideal, I am happy to say that incredible scientific advances are changing the outlook and long-term survival for patients with advanced stage melanoma.

One of the difficulties with diagnosing melanoma is that the location and appearance of melanomas can be quite variable.  The majority of melanomas occur on trunk in men and the thighs in women.  However, they can appear anywhere, including on the scalp, on the soles of the feet, between the toes and underneath the fingernails or toenails.  More cryptic locations include the inner ear or inside the eye.

We usually learn that the appearance of a melanoma meets the ABCDE criteria, but that is not always the case.  ABCDE stand for:  Asymmetry (melanomas tend to be asymmetric), Border (melanomas usually exhibit an irregularly shaped, scalloped border), Color (melanomas usually reveal more than one color in an irregular pattern), Diameter (melanomas were once thought to be larger than the width of a pencil eraser, but this descriptor is now considered irrelevant), and Evolution (patients often note that the lesion that is ultimately diagnosed as a melanoma has evolved, or exhibited recent changes in appearance or symptoms).  Melanomas come in a variety of colors, shapes and sizes.  They can be black, brown, bluish-grey, red or pink.  They can have spots of color, such as black or white, within them.  They can be larger than a dime or as small as the head of a pin.

Several years ago, I recall that, within a two month period, I diagnosed three melanomas that had no dark pigment whatsoever.  They were entirely pink spots that just looked unusual to me.  That unusual appearance, along with a gut reaction, prompted a biopsy and, ultimately, a diagnosis of melanoma for three unsuspecting individuals who were smart enough to understand the importance of yearly skin examinations.  These cases illustrate that there is no one criterion that would make a person think that he or she has a melanoma—and therein lies the truth.  It takes the trained eyes of a professional—who sees thousands of skin lesions every day—to detect melanoma.

While melanoma is potentially deadly, the vast majority of melanomas are diagnosed before they have the opportunity to spread to the lymph nodes or beyond.  Early diagnosis is key to long-term survival.

The American Academy of Dermatology recommends yearly total body skin examinations, which include looking at the scalp, in the mouth, under the arms and breasts, between the buttock folds, between the toes, and everywhere else too.  If you have a history of skin cancer, you might need to have these exams more frequently.  Make sure your healthcare provider has you undress so that hidden melanomas do not go undetected.  And always report to your healthcare provider any changes in your skin, especially changes in specific spots that have caught your attention.

The future for melanoma patients is very bright given that scientific research has led to remarkable breakthroughs that suggest possible long-term survival even for patients with advanced disease.  However, prevention is the greatest deterrent to developing melanoma in the first place.  As I always like to say, cover yourself with CASH:  Clothing, All-over sunscreen (water resistant, broad spectrum, SPF 30+, reapply every 1-2 hours even under clothing), Sunglasses and a Hat.  These preventive measures just might save your life.

About Cyndi Yag-Howard, M.D, F.A.A.D:  Dr. Yag-Howard is a board-certified dermatologist and dermatologic surgeon with specialized training and extensive experience in facial sculpting.  She is a nationally recognized speaker on advanced surgical techniques for optimal surgical outcomes.  She is active in many professional organizations, holding leadership roles in the American Medical Association, the American Academy of Dermatology, the American Society of Dermatologic Surgery, the Women’s Dermatologic Society and Bikes for Tykes.  Please visit www.yhderm.com for more information.