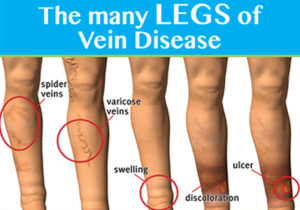 Vein disease, also known as Venous Insufficiency (VI), affects over 40% of adults in the United States. Despite it being an extremely common and treatable disease, VI is often misdiagnosed, leading to a delay in treatment. Often times, patients are evaluated by multiple specialists before ending up at the office of an experienced vascular surgeon for a complete vascular consultation, assessment, and diagnosis.

There are various signs and symptoms of VI with which a patient may present, prompting visits to various medical specialties. Examples include:
A. Dermatology for a biopsy of discolored skin around the ankle, “itchy” skin that does not respond to topical medications or a nonhealing biopsy site.

B. Cardiology for extremity edema (leg swelling) or fluid overload.

E. Wound Care for what appears to be “diabetic ulcers” or other non-healing leg ulcers.

F. Orthopedics for ongoing inflammation or swelling after a successful total knee replacement.

G. Gynecology due to unexplained pelvic pain, painful menstruation, or pelvic pain during or after intercourse.

In many cases, these treatments may keep symptoms at bay, however, until the root cause of the problem is identified signs and symptoms will often reoccur.

Venous insufficiency occurs when the valves within the leg veins no longer open and close properly, leading to the leaking of blood backward towards the feet. This gravitational backflow of blood increases the venous pressure in the lower part of the legs, resulting in the commonly experienced signs and symptoms of bulging varicose veins, swelling, leg cramps, restless legs, tingling and numbness in the feet, heaviness and achiness of the legs, changes in skin texture, skin discoloration, and even ulcerations. If left untreated, these signs and symptoms of VI have the potential to worsen over time.

Many factors contribute to VI including family history, age, pregnancies, sitting or standing professions, gender, weight, and history of blood clots. VI is most commonly diagnosed with a specialized ultrasound that allows for accurate identification, localization, and grading the severity of the disease.

There are effective, minimally invasive options that are available to treat venous disease, the most common being a procedure known as endovenous ablation. This is an outpatient procedure performed under local anesthetics which uses heat (radiofrequency) or glue (VenaSeal) to seal the leaky vein(s) and prevent the backflow of blood. In most cases, the patient may return to normal activity soon after their venous treatment is completed.

A newly discovered venous problem is Pelvic
Congestion Syndrome (PCS), which primarily affects women. Often, treatment for PCS is delayed, as many patients do not realize that symptoms such as pelvic pain, pain with intercourse, or pain with menstruation are related to a vascular disorder rather than gynecological one. PCS occurs due to iliac vein compression, where the iliac veins become narrowed or blocked by the overlying artery, resulting in pelvic varicose veins that put pressure on the surrounding pelvic organs. Patients who present with PCS often experience persistent achiness or pain in the buttocks, thigh, or knee regions with prolonged sitting or standing which often leads them to seek treatment from an orthopedist, pain management specialist, or chiropractor.

Once patients are diagnosed with PCS due to iliac vein compression, they may be candidates for a cutting edge procedure, called intravascular ultrasound (IVUS). IVUS is a catheter-based ultrasound device which allows a direct examination of the blocked veins from within. This allows for a much more accurate and precise examination of the pelvic veins in order to stent and reopen the blocked pelvic vein(s).

We understand that at times it may be difficult to determine which medical professional to initially see for your symptoms, however, with our ongoing venous disease education within the community, our goal is to promote earlier detection of VI. Dr. Magnant offers monthly seminars where patients can learn more about venous disease and the various treatment options offered. If you or someone you know has signs and symptoms referenced throughout this article and are interested in a thorough venous evaluation by our professional team, please visit our website at weknowveins.com or contact us by phone at 239-694-VEIN (8346).

. State of the art vein treatment techniques including Closurefast, Laser, VenaSealTM and Ivus

Allison F. (Actual Patient) – My “Vein” HORROR Story
In February of 2018, I first noticed the red, tiny, itchy spots on my right ankle. At first, I thought they were bug bites because of how itchy they were. I almost felt like I had poison ivy, but when I scratched them I would get sores and started to bleed.

A month later the spots were still present so I went to the dermatologist where they prescribed me Eucrissa for eczema. By April, two months later on Eucrissa, the spots were still there and it even looked like I was having an allergic reaction so I made another appointment with the dermatologist and they prescribed me a new cream. This new medicine did not help the situation either, so I went back to the dermatologist again where they took two biopsies and tested for both skin mites (scabies) and fungal infection. The doctor went ahead and
prescribed me medicine for scabies, and both my husband and I had to be treated. The test results came back negative for both.

I returned to the dermatologist where I received yet another new cream and some blood work to check my thyroid and to test to see if I had lupus–which both yet again proved to be fine.

I was then referred to a Rheumatologist who said she wasn’t a specialist in this area and that I needed to do further testing to determine if I had an autoimmune disorder. At this point, the spots that began on my right ankle had spread to both legs. I then was sent to a more specialized Rheumatologist who looked at my legs and ran some additional bloodwork as an initial screening to see if he would need to run additional tests. Long story short, the results were negative for Lupus so he ran a full spectrum of bloodwork, which as you by now may have guessed came back negative.

I was then referred to Mayo Clinic, but I decided instead to follow my dermatologist’s recommendation to see an allergist. My allergist took one look at my legs and said that this was not something that he could treat with allergy shots and that I needed to go to the University of Miami Center for Dermatology and they could run some pathology that could hopefully give me some answers. I went down to Miami where the doctor prescribed some topical cream (Protopic Tacrolimus), took a punch biopsy of my right leg, and finally promised me that he would get to the bottom of this ordeal.

The doctor called me right before Christmas to tell me that it came back that I had Acroangiodermatitis and that I needed to wear compression stocking and go see a vein specialist.
That day, eleven months after I first visited the dermatologist for this problem, I made an appointment with Dr. Magnant.

In January of the new year, I saw Dr. Magnant’s Nurse Practitioner Jill Tanner. She looked at my legs and was confident that this was stasis dermatitis caused by venous insufficiency.

I scheduled an appointment to have an ultrasound of both of my legs. The ultrasound confirmed that I had venous disease issue in both legs that Dr. Magnant could treat with an endovenous ablation procedure. I scheduled the procedure and ultrasound follow-ups that day, fourteen months after the start of my journey.

My legs are now 100% improved and I no longer have itchy inflamed skin or eczema. Vein Specialists finally has granted me a definite answer to this seemingly impossible diagnosis.

I hope that with my story I will help others recognize that venous disease can present with many different symptoms and should be treated by a Vein Specialist.

Benefits of Invisalign and Straight Teeth

Fix Your Gut, Fix Your Problems