Knowing Risks of Glaucoma Can Stop Sneak Thief of Sight

African Americans, Hispanics, and others with a family history of glaucoma are particularly vulnerable 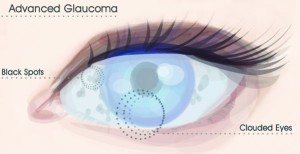 Glaucoma is a silent illness; most people have no early symptoms or warning signs as their peripheral vision diminishes or blind spots occur. It affects more than 2.7 million Americans age 40 and older. Another 2 million do not know they have the disease. January is Glaucoma Awareness Month, and Frantz EyeCare Medical Director Dr. Jonathan Frantz wants to remind people that knowing your risk for the disease can save your sight. If untreated, glaucoma ultimately results in blindness.

“Glaucoma can be a ‘sneak thief’ illness, and currently there is no treatment to restore vision once it’s lost,” said Dr. Frantz.  “But when we catch glaucoma early and closely monitor and treat people, we can significantly slow its progression and minimize vision loss.”

Among Americans, higher-risk groups include those of African or Hispanic heritage and others with a family history of the illness. Elderly individuals with African ancestry are five times more likely to develop glaucoma and 14 to 17 times more likely to become blind than similar-aged individuals with European ancestry. The risk for Hispanic Americans rises markedly after age 60. Those of any ethnicity who have a family history of the illness are four to nine times more susceptible.

For individuals with symptoms of or at risk for eye diseases like glaucoma, the American Academy of Ophthalmology recommends that they see their ophthalmologist to determine how frequently their eyes should be examined. The Academy recommends that those with no symptoms or risk factors for eye disease get a baseline screening at age 40, when the signs of disease and change in vision may start to occur.

About Glaucoma
Glaucoma damages the optic nerve, the part of the eye that carries the images we see to the brain. As glaucoma worsens, cells die in the retina — a special, light-sensitive area of the eye — reducing the optic nerve’s ability to relay visual information to the brain. In the most common form of the disease, open-angle glaucoma, peripheral vision usually narrows, then other blank spots occur in the visual field. Symptoms of the less-common form of the disease, angle closure glaucoma, include blurred vision, severe eye pain and headache, rainbow-colored halos around lights and nausea and vomiting.

Share
Previous THE IMPORTANCE OF THE RESIDUARY CLAUSE IN A WILL OR TRUST
Next Strong Colleges, Strong Communities…