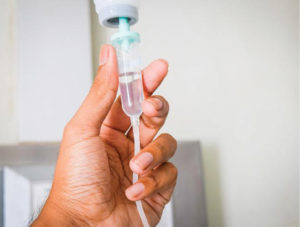 Anxiety disorders affect approximately 40 million adults in the United States. Patients need to be wary of “proprietary protocols” and “special formulas” when deciding to undergo treatment.

IV Ketamine
Over the past ten years, Ketamine has been studied in patients with severe depression. A rapid instantaneous effect takes place immediately upon the drug being dispensed intravenously. Due to the outcomes, there has been a lot of buzz in the news lately about IV Ketamine therapy for treating treatment-resistant depression as well other mental health disorders such as PTSD, OCD, and phobias. We can now add Social Anxiety Disorder to the list. For people who suffer from social anxiety, its effects can be crippling. Everyday interactions may cause such distress in these people that it interferes with opportunities for employment, healthy positive interactions with friends and family, and for students, not being able to reach their full academic potential in the classroom. These people may exhibit physical manifestations of their anxiety in the form of sweaty palms, high blood pressure, and a racing heart. Over an extended period of time, these symptoms not only cause mental anguish but also affect one’s overall physical health.

Three of the most common forms of depression are GAD, MDD and PTSD.

GAD
GAD or general anxiety disorder is very common and on the verge of sudden rise given our current pandemic situation causing isolation, fear, agitation and stress. According to the Anxiety and Depression Association of America, GAD is diagnosed when a person finds it difficult to control worry on more days than not for at least six months and has three or more symptoms. This differentiates GAD from worry that may be specific to a set stressor or for a more limited period of time.”

PTSD
PTSD (post traumatic stress disorder) causes extreme side effects. Many individuals have severe nightmares, flashbacks, hyper startle responses, and loss of interest, severe anxiety and are often suicidal. Numerous military veterans with PTSD have issues with employment, violence, and relationships. These veterans often have severe flashbacks. Many people who suffer from PTSD have difficulty sleeping, feel detached and estranged, which can lead to permanent disability.

MDD
The typical treatment options for MDD (major depressive disorder) are antidepressant medications and counseling therapy. According to the National Institute of Mental health, Depression (major depressive disorder or clinical depression) is a common but serious mood disorder. It causes severe symptoms that affect how you feel, think, and handle daily activities, such as sleeping, eating, or working. To be diagnosed with depression, the symptoms must be present for at least two weeks.

Ketamine impacts mood, anxiety and alleviates pain, which can result in positive treatment outcomes for the following disorders:

Symptoms of depression vary, but these are a few common causes for concern:1
• Feeling nervous, irritable, or on edge
• Having a sense of impending danger, panic or doom
• Having an increased heart rate
• Breathing rapidly (hyperventilation), sweating, and/or trembling
• Feeling weak or tired
• Difficulty concentrating
• Trouble sleeping
• Experiencing gastrointestinal (GI) problems
• Feelings of Despondency
• Suicidal Tendencies

Typically, anxiety disorders are treated with several modalities that include behavioral counseling and antianxiety or antidepressant medications. The issue is that one-third of those prescribed medication fail to recover due to treatment resistance. In other words, these drugs offer minimal to no solutions.

A recent 2020, peer-reviewed study in France looked at the correlation of Ketamine therapy and its effect for those with major depressive disorder, and bipolar disorder. The researchers determined that “Ketamine may provide a rapid, robust, but transient antidepressant effect in MDD and BD. It appears particularly interesting in patients experiencing suicidal thoughts with its rapid effect in suicidal ideation. The benefits of ketamine are transient, up to 1–2 weeks after infusion and its long-term effect is less reported. Acute side effects associated with single-dose use in depression are common, although generally transient and resolve spontaneously. However, acute and long-term efficacy and safety issues must be further explored, and adverse event should be systematically assessed.

Further studies are needed to explore the best dose and mode of administration to optimize ketamine antidepressant effect and to clarify its mechanism of action.”

PTSD
Another study in 2019 found that Ketamine treatment in those with PTSD to be beneficial. “PTSD continues to be a problematic psychiatric condition that can be difficult to treat. SSRIs are the first-line treatment, and they are the only pharmaceutical class approved – their use may lead to a reduction in symptoms but, oftentimes, PTSD can be found to be treatment resistant. In addition, there are many patients who have participated in trials of SSRIs as well as many other psychoactive drugs without complete remission. Atypical antipsychotics such as quetiapine and risperidone are sometimes used clinically to control these symptoms. Benzodiazepines are used at times as well, but with caution as individuals suffering from PTSD are at heightened risk for addiction. Prazosin is used regularly now to combat nightmares, which contribute to the insomnia but may not lower other PTSD symptoms. Some are supplemented with psychotherapy and hospitalization but to no avail.

“Given this, novel treatments are needed for PTSD. One such treatment could be ketamine. As noted, there exists some hesitation for its use based on the fact that it may cause transient dissociation; however, more recent studies suggest that this may not be as frequent as previously thought. Based on the limited data in the form of animal studies, a randomized controlled trial, and case reports, ketamine has been shown to result in a near complete resolution of symptoms over the short term and seems to have similar findings to the use of ketamine in MDD. These clinical improvements are immediate and last well beyond the half-life of ketamine but unfortunately are transient lasting 1–2 weeks. It is thought that upregulating BDNF and antagonizing NMDA serve to reverse some of the damage caused by chronic stress. With more investigation, ketamine may prove to be a viable tool in treating PTSD for those who fail more conventional treatments.”

Dr. Stephen Reichbach states, “In our opinion, IV Ketamine infusions are the gold standard for patients with severe mood disorders or those suffering from chronic pain. IV ketamine provides 100% bioavailability meaning that 100% of the drug administered, gets where it needs to go (the brain). This provides easier titration and a higher likelihood for a positive response. At the end of the day, the out of pocket cost to the patient may be more than the IV infusions depending on an individual’s insurance coverage, not to mention the time convenience advantage for the patient of the IV ketamine infusions.”

The Right Approach for a Common Knee Injury

Band Together When Diet, Exercise and Medications are Not Enough

Oxygen, Alkalinity and Your Health