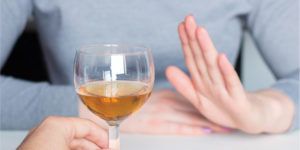 Social drinking has become commonplace in our society, many people are unaware of the long term effects that it has on the body and body and brain and how quickly it can escalate into alcohol use disorders, which affects over 14 million adults and nearly half a million adolescents.

Depending on the length of time someone has been drinking, and the amount consumed regularly, or in binging episodes, the impact can have moderate to severe outcomes. If left untreated, alcoholism can lead to permanent brain dysfunction, disabilities, chronic pain, disease states, and death. 3.3 million people die each year due to alcohol. The cumulative effects of drinking are the most damaging.

For heavy drinkers, trying to abstain from drinking for long periods of time, it is significantly challenging, as the brain is programmed to associate drinking with pleasure, and it’s also triggered by environmental and psychological issues.

For years there have been medically assisted treatments that block the NMDA (N-methyl-D-aspartate) receptor in the brain, which reduces the desire to drink. However, there is another way to block this receptor safely, and that is with Ketamine IV therapy.

A recent study was conducted to evaluate the outcome of ketamine IV infusion therapy for alcohol use disorder. The trial included the following baseline information and conclusions:

Objective: Pharmacotherapy and behavioral treatments for alcohol use disorder are limited in their effectiveness, and new treatments with innovative mechanisms would be valuable. In this pilot study, the authors tested whether a single subanesthetic infusion of ketamine administered to adults with alcohol dependence and engaged in motivational enhancement therapy affects drinking outcomes.1

Methods: Participants were randomly assigned to a 52-minute intravenous administration of ketamine (0.71 mg/kg, N=17) or the active control midazolam (0.025 mg/kg, N=23), provided during the second week of a 5-week outpatient regimen of motivational enhancement therapy. Alcohol use following the infusion was assessed with timeline followback method, with abstinence confirmed by urine ethyl glucuronide testing. A longitudinal logistic mixed-effects model was used to model daily abstinence from alcohol over the 21 days after ketamine infusion.1

Results: Participants (N=40) were mostly middle-aged (mean age=53 years [SD=9.8]), predominantly white (70.3%), and largely employed (71.8%) and consumed an average of five drinks per day prior to entering the study. Ketamine significantly increased the likelihood of abstinence, delayed the time to relapse, and reduced the likelihood of heavy drinking days compared with midazolam. Infusions were well tolerated, with no participants removed from the study as a result of adverse events.1

Conclusions: A single ketamine infusion was found to improve measures of drinking in persons with alcohol dependence engaged in motivational enhancement therapy. These preliminary data suggest new directions in integrated pharmacotherapy-behavioral treatments for alcohol use disorder. Further research is needed to replicate these promising results in a larger sample.1

Ketamine IV Therapy
For many years, Ketamine has been studied in patients with severe depression and PTSD. It is now also being studied for its effectiveness in treating alcohol and substance use disorders. A rapid, instantaneous effect takes place immediately upon the drug being dispensed intravenously. When a well-trained physician administers Ketamine, it can help with symptoms associated with depression such as like moodiness, decreased concentration, low self-esteem, impaired sleep, decreased sexual desire, diminished appetite, addiction, and can even alleviate suicidal thoughts. During the treatment, the initial infusions usually take place over approximately two weeks, with six infusions that are administered every other day.

Gulf Coast Ketamine Center
Gulf Coast Ketamine Center works closely with a therapist well-versed in Ketamine therapy to maximize the benefits of the therapy in patients who are appropriate for this particular treatment. The uses of IV Ketamine keep expanding as far as the mental health field is concerned; selecting a practitioner with a significant amount of Ketamine experience who follows and practices evidence-based medicine, and who tailors each patient’s individual protocol as best suited to their clinical situation is essential.

Dr. Steven Reichbach states, “In our opinion, IV Ketamine infusions are the gold standard for patients with severe mood disorders or those suffering from chronic pain. It is now purported as viable option for those that suffer from addictions as well.

“IV ketamine provides 100% bioavailability meaning that 100% of the drug administered, gets where it needs to go (the brain). This provides easier titration and a higher likelihood for a positive response. At the end of the day, the out of pocket cost to the patient may be more than the IV infusions depending on an individual’s insurance coverage, not to mention the time convenience advantage for the patient of the IV ketamine infusions.”