Throughout a Woman’s Life Affects Many Tissues, Including their Gums. 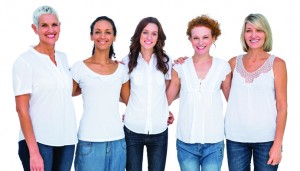 Women experience hormonal changes throughout different periods of their life.  They have specific health needs as they transition into puberty, menstruation cycle, pregnancy or menopause.  Women oral health needs also change at these times.  While women tend to take better care of their oral health than men do, women’s oral health is not markedly better than men’s. This is because hormonal fluctuations throughout a woman’s life affects many tissues, including the gum tissue.

A study published in the January 1999 issue of the Journal of Periodontology reports that at least 23 percent of women ages 30 to 54 have periodontitis (an advanced state of periodontal disease in which there is active destruction of the periodontal supporting tissues). And, 44 percent of women ages 55 to 90 who still have their teeth have periodontitis.  In many instances, patients do not realize they have periodontal disease until it reaches advanced stages –  It progresses silently with few to no symptoms.  However, patients can take steps to protect their oral health at these different stages of their life.

During puberty, women experience an increased level of sex hormones, such as progesterone and possibly estrogen, causes increased blood circulation to the gums. This may cause an increase in the gum’s sensitivity and lead to a greater reaction to any irritation, including food particles and plaque. During this time, the gums may become swollen, turn red and feel tender.  As a young woman progresses through puberty, the tendency for her gums to swell in response to irritants will lessen. However, during puberty, it is important to follow a good at-home oral hygiene regimen, including regular brushing and flossing, and regular dental care. In some cases, a dental professional may recommend periodontal therapy to help prevent damage to the tissues and bone surrounding the teeth.

Occasionally, some women experience menstruation gingivitis. Women with this condition may experience bleeding gums, bright red and swollen gums and sores on the inside of the cheek.

Menstruation gingivitis typically occurs right before a woman’s period and clears up once her period has started.

Women who are menopausal or post-menopausal may experience changes in their mouths. They may notice discomfort in the mouth, including dry mouth, pain and burning sensations in the gum tissue and altered taste, especially salty, peppery or sour.

In addition, menopausal gingivostomatitis affects a small percentage of women. Gums that look dry or shiny, bleed easily and range from abnormally pale to deep red mark this condition. Most women find that estrogen supplements help to relieve these symptoms.

Careful periodontal monitoring and excellent oral hygiene is especially important for women who may be noticing changes in their mouths during times of hormonal fluctuation. To help ensure good oral and overall health, be sure to:  See a dental professional for cleaning at least twice a year.   See a periodontist  if you or your dentist notice:  Bleeding gums during brushing, Red, swollen or tender gums, Gums that have pulled away from the teeth, Persistent bad breath, Pus between the teeth and gums, Loose or separating teeth, A change in the way your teeth fit together when you bite or A change in the fit of your dentures.

Dr. Teodoro is a Board Certified Periodontist.  He holds both Diplomate status in the American Academy of Periodontology and the International Congress of Oral Implantologists.  Dr. Teodoro is an Adjunct Professor to the University of Pittsburgh School of Dental Medicine.  He is also a Clinical Assistant Professor at the Naples Dental Residency Program for the University of Florida.  Dr Teodoro served as a Major in the United States Air Force practicing Periodontics.  Throughout his Air Force career he served as the Chief of Periodontics, Director of the Implant Board & Clinical Instructor.  Dr. Teodoro is one of the local leading authorities in Laser Periodontal Therapy and in the Brånemark method of Implantology.  He was the first Periodontist in both Lee and Collier county to bring Periodontal Laser technology with the PerioLase Laser for the treatment of Periodontal Disease.