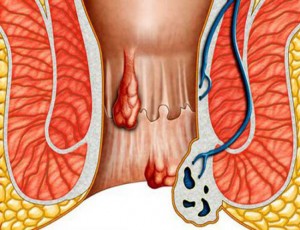 Hemorrhoids have been the butt of jokes for many decades. All of us have seen the commercials selling the likes of hemorrhoid treatments such as creams, ointments, liniments, pads, soaks, pillows and wipes. I’ll bet you can even remember a party or two where these items were given as gag gifts. Fact is that hemorrhoids are no laughing matter if you’re the one on the receiving end. They can be very painful, itchy, cumbersome and downright messy!

How do hemorrhoids form? What are hemorrhoids anyway? Well let me explain. There are many muscles intertwined in the formation of the rectum and anus. However for our purposes we will focus on two of them, the internal and external sphincters. These types of muscles are found in many places in the GI tract and work as valves that open and close tightly to regulate flow of materials. These types of muscles require a rich Arteriole vascularity (blood supply) for oxygenation and energy needs. Networks of veins are located around these muscles which collect deoxygenated blood for transport back to the heart and lungs. Hemorrhoids are formed when these small veins become engorged with blood and expand.

There are many things that can contribute to the formation and enlargement of hemorrhoids such as; heavy lifting, constipation, overzealous personal hygiene, pregnancy and labor . Any activity which causes prolonged abdominal contractions can force more blood into the rectal area causing engorgement of the venous structures and the formation of hemorrhoids.

Signs and symptoms of hemorrhoid vary between internal and external hemorrhoids. External hemorrhoids commonly present as protrusions around the anal opening which can be very painful and itchy. Most of the time when external hemorrhoids flare the symptoms will subside on their own and they will shrink back to their normal state. However, occasionally when the hemorrhoid becomes engorged, a blood clot will form and blood cannot escape the tissue. This is called “thrombosis” and is an extremely painful complication. Itching is caused by increased mucus production and inflamed tissue expansion and contraction. Less commonly, external hemorrhoids can rupture, bleed and become infected.

Treatment of external hemorrhoids generally includes a high fiber diet, adequate hydration and stool softeners if constipation is a problem. Straining to have bowel movements should be avoided. The excessive rectal hygiene and the use of wet wipes are cautioned as this can irritate the area and increase inflammation around the area. The use of topical ointments such as Preparation H, Hydrocortisone rectal cream and Tuck’s pads can help relieve symptoms of pain and itching and reduce inflammation. Soaking in warm bath water keeps the area clean and relaxes muscles around the rectum which will allow engorged blood to drain from the hemorrhoids better. The use of donut pillows keep weight and pressure off of the area reducing discomfort and decrease further irritation and inflammation.

When complications such as thrombosis, excessive bleeding or infection occur your doctor may need to perform procedures such as a hemorrhoidectomy or incision and drainage.

Treatments of internal hemorrhoids include rectal suppositories and creams which reduce inflammation and shrink hemorrhoid tissue. Procedures such as rubber band ligation, cauterization or coagulopathy are performed on large obstructive or bleeding internal hemorrhoids.

Prevention of internal and external hemorrhoid enlargement includes a high fiber diet with adequate hydration to prevent constipation and straining. When people have chronic constipation they may need to use a stool softener or laxative to achieve soft stools. I also tell patients to limit time spent on the toilet “go when you need to and leave.”

Share
Previous Heels: How High is Too High?!
Next Living With Hearing Loss