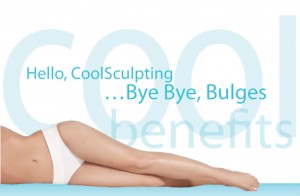 An abundance of non-surgical devices and procedures exist out there when it comes to body contouring.

One of the latest and most innovative procedures, CoolSculpting, is a non-invasive procedure that selectively reduces fat layers in problem areas using a patented cooling technology.  Think of it as fat freezing.

There is a medical entity called popsicle panniculitis that was first described in the 1970s, where little children had popsicles placed in their mouths, but because they were so young, they were not able to pull the popsicles out.  Consequentially, the children’s cheeks developed depressions that were later determined to be a result of cold-induced inflammation of the fat.

Taking this into account, researchers at the Harvard Medical School then attempted to take advantage of this phenomenon to deliberately treat or remove undesired fat.

They developed a safe procedure, cleared by the FDA, which gently cools unwanted fat cells in the body to induce a natural, controlled elimination of fat cells.

The device’s hand piece vacuums an area of fat between two cold plates.  The skin and fat are cooled to just above freezing, causing microcrystal’s to develop in the fat cells.  The presence of these crystals triggers an inflammatory response, telling the immune system to remove these cells, without harming surrounding tissue.  Over the course of a few months, the immune system slowly removes these cells, resulting in a reduction of fat in the treated area.

CoolSculpting is recommended for patients who have either successfully dieted or exercise routinely and have some of that exercise-resistant fat or an area that is stubborn to exercise.  You know…those love handles that just won’t go away, or the ‘pooch’ that most people just can’t get rid of.

Most patients come in to have their abdomen and love handles treated.  As long as the desired area to be treated can be pinched and pulled, so that the device can actually vacuum it between the two cool plates, then they are most likely a good candidate.

During the procedure, there is some discomfort when the vacuum first takes hold.  However, over the next 10 minutes or so, the cold induces numbness in the skin.

After the device is removed, the skin and the fat are in fact somewhat frozen, thawing over the next five or less minutes.  And all patients experience some form of numbness for about three weeks following the procedure.

Since the procedure is a noninvasive way to treat fat, there are no incisions, anesthesia, or medications required.  And patients can return to their normal activities immediately.

Results are typically seen three to four months after treatment. However, some patients may see results as early as two months.

Dr. Daniel I. Wasserman is a fellowship-trained laser and skin can dermatologist.  Much of his fellowship was spent in the laboratory that developed CoolSculpting at Harvard Medical School.  For more information on treatment options and other dermatologic concerns, call his office at 239-449-8328 at Riverchase Dermatology and Cosmetic Surgery in the Downtown Naples location.