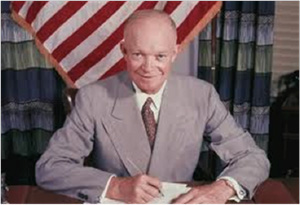 Surprisingly, for most people heart pro-blems and a shorter lifespan are related to eating too LITTLE fat and cholesterol, rather than too much.  In fact, recent studies have conclusively shown:
1. Eating cholesterol does not increase blood serum cholesterol.
2. Eating saturated fat does not increase cholesterol in the long term (it may in the short term).

That isn’t what we have learned for most of our lives, so I want to share a story with you about President Eisenhower:

On a fall day in 1955 in Denver, Colorado, President Dwight D. Eisenhower, or “Ike”, lunched on a hamburger, played a round of golf, and had a heart attack.  He was attended by the world-renowned Harvard cardiologist, Dr. Paul Dudley White, who announced the president’s condition and instructed the world – especially middle aged men – on his theory of the correlation between cholesterol and heart disease.

At that moment Ike was otherwise the picture of health: He weighed 172, the optimal weight for his height of 5’10; he had no family history of heart disease; he had stopped smoking 6 years before, and he exercised regularly.  As president, his blood pressure had been meticulously charted and it was rarely elevated.  His cholesterol was only 165, well below the currently recommend 200 mg/dL.  He should have had a strong healthy heart, right?

After his heart attack, Ike dieted religiously, and had his blood pressure checked 10 times a year.  He ate little fat and less cholesterol; his meals were all cooked in soybean oil or margarine.

And the more he dieted, the grumpier he got!  He gained 4 lbs.  The president’s personal  physician,  Dr. Snyder, was mystified how anyone could eat so little, exercise so much, and not lose weight.  Next, he gave up all fats, even margarine, and replaced it with corn oil.  He ate 1 egg and 1 piece of cheese per month, and on rare occasion would have a piece of cold meat with lunch.  On his last day of office, Jan. 19, 1961, his cholesterol had risen 94 points since that fall day in Denver.  Dr. Snyder didn’t have the courage to tell the president, and instead told him it only rose 44 points.  Ike passed away 8 years later of heart disease after suffering another 6 heart attacks.

America got the message that fat was bad for us, so we took it out!  When I was growing up, a healthy breakfast was skim milk with a low-fat cereal, or maybe a low-fat bagel with low-fat cream cheese, perhaps followed by a midday binge on rice cakes.  Lunch was a turkey sandwich with baked potato chips and a diet soda.  Dinner was spaghetti.  We took out the fat, and replaced it with carbohydrates – a LOT of carbohydrates.

We’ve been eating this ENORMOUS amount of carbohydrates for 50 years now.  Over time, a body starts to anticipate our carbohydrate intake.  The pancreas releases insulin in advance of our meals, and we wind up with too much insulin in our systems even after the glucose has been put into cells.  When there is excess insulin in our system two major things happen: insulin scavenges for sugar, and this causes sugar cravings and that slow-dumb feeling you get; also, you CANNOT BURN FAT with insulin in your bloodstream.  It is impossible to lose weight with insulin in your bloodstream.  Here’s what the blood sugar roller coaster looks like:

Even though Eisenhower followed a low fat and low cholesterol diet, he didn’t lose weight, AND he suffered 6 more heart attacks before he passed away.  Therefore it wasn’t dietary fat or cholesterol that caused his heart problems.

Now around this same time heart disease became easier to diagnose through improved technology, so America became very interested in it.  In 1948, the National Heart, Lung, and Blood Institute working with Boston University launched a study of an entire town’s dietary habits and heart disease in Framingham, Massachusetts, which is still going on today.  William Castelli, Director of The Framingham Study reports: “In Framingham, Massachusetts, the more saturated fat one ate, the more cholesterol one ate, the more calories one ate, the lower people’s serum cholesterol. . . we found that the people who ate the most cholesterol,

ate the most saturated fat, and ate the most calories, weighed the least and were the most physically active.”7

Similar studies have continued to corroborate these findings.  In 2010 a Japanese study involving over 58,000 participants showed that the less saturated fat eaten the HIGHER the risk for death from strokes and cardiovascular disease.

If eating more fat is healthy, we all get to go have French Fries, right?  No – there are healthy fat sources and unhealthy fat sources. The unhealthy and dangerous oils are hydrogenated or trans-fat oils, rancid oils, or oils that are very high in Omega 6.  Omega 6 is tied to inflammation and lowered immune defenses, and is much higher in the current American diet that our historic diet was.

Therefore oils high in Omega 6 should be AVOIDED: canola, corn, cottonseed, soybean, safflower, and sunflower oil.  It is just as important to use non-rancid oils.  Oils that are healthy at room temperature may not be suitable for cooking.  For example, cooking with olive oil at higher heat causes it to go rancid: instead use oils that are safe at high temperatures like coconut oil.  Coconut oil has side benefits, too: it is a mild detoxifier, it speeds up your metabolism, and it has been linked to preventing Alzheimers.

So – enjoy!  Eating healthy fats, and avoiding unhealthy carbohydrates, will lead to greater vitality and a long vibrant life!

For more information, go to www.longevitywellnessclinic.com.

Atherosclerosis: Are Your Arteries Healthy?

Is There a Link Between Nutrition and Cancer?