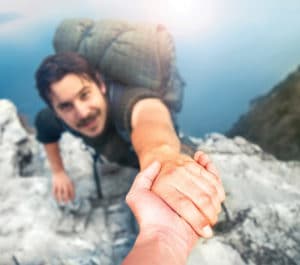 The Apostle Peter was a bold man. He stepped up when others stepped back. He was often the first to speak in a group setting. Because of his faith, he was able to walk on water. And, like most risk takers, he experienced his share of failures.

Faith involves risk. Failure is a possibility. But that’s okay. Step out of the boat anyway. I love a small part of a speech given by President Teddy Roosevelt back in 1910. He said,

“It is not the critic who counts; not the man who points out how the strong man stumbles, or where the doer of deeds could have done them better. The credit belongs to the man who is actually in the arena, whose face is marred by dust and sweat and blood; who strives valiantly; who errs, who comes short again and again, because there is no effort without error and shortcoming; but who does actually strive to do the deeds; who knows great enthusiasms, the great devotions; who spends himself in a worthy cause; who at the best knows in the end the triumph of high achievement, and who at the worst, if he fails, at least fails while daring greatly, so that his place shall never be with those cold and timid souls who neither know victory nor defeat.”

I would rather die on the playing field engaged in the battle than rot in the grandstands as a spectator.

Did Peter fail when he started to sink? Yes, he failed. But I think there were 11 bigger failures sitting in the boat afraid to even try to walk on water.

We need men and women of courage today. High-impact people who are willing to take risks and trust God with the results.

Failure is an indispensable part of growth.

The greatest lessons I’ve learned in life are from the many mistakes I’ve made along the way.

If you want to be a high-impact person, you too, will make some mistakes and need God to bail you out.

Peter took his eyes off of Jesus and his faith began to waver. But give Peter some credit… he was in the middle of a really big storm, he was outside of his boat in the darkest part of the night. Can you imagine how scary that must have been? I get nervous just standing at the back of cruise ship at night looking out at the sea!

Nevertheless, if we keep our eyes on Christ, what do we really have to fear?

As followers of Jesus Christ, we’ve been called to live a life of adventure that requires great risk and great faith.

Perhaps you’ve tried before but failed. That’s okay. Admit your lake of faith and move on.

Whatever you do, don’t give up, give in, or quit.

Don’t live with regrets and second guesses. Learn from your mistakes and then move on. It does no good to dwell on the past and wish you could do it over. Just keep moving forward… that’s how your faith grows.

Does Your Sunburn Require Medical Treatment?

When Mom Has Alzheimer’s Disease