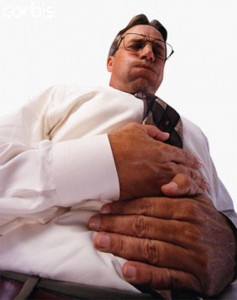 Dyspepsia,also known as upset stomach or indigestion, refers to a condition characterized by chronic or recurrent pain in the upper abdomen, upper abdominal fullness, accompanied by bloating, belching, nausea, or heartburn. It is a common problem worldwide. In the United States, the prevalence is approximately 25% excluding those people who have typical gastroesophageal reflux disease (GERD) symptoms. It is frequently associated with gastritis. In a small minority it may be the first symptom of peptic ulcer disease (an ulcer of the stomach or duodenum) and occasionally cancer. Hence, newly onset dyspepsia in people over 55 or the presence of other alarming symptoms requires further investigations.

The risk of malignancy increases with age, therefore patients aged 55 years or younger with no alarm features, may often be presented two management options to consider:

1) Test and treat for H. pylori (a bacteria found in the stomach, linked to the development of gastric and duodenal ulcers and stomach cancer) using a validated noninvasive test and trial of acid suppression. If eradication is successful, but symptoms do not resolve, then….

2) A trial of acid suppression with a proton pump inhibitor (PPI) for 4-8 weeks.

At least half the world’s population is infected by the H.pylori bacteria, making it the most widespread infection in the world. Actual infection rates vary from nation to nation. The developing world has much higher infection rates than an industrialized nation, probably due to poor sanitary conditions. The percentage of infected people increases with age, with about 50% infected for those over the age of 60 compared with around 10% between 18 and 30 years. Prevalence appears to be higher in African-American and Hispanic populations, most likely due to socioeconomic factors.

The test and treat options preferable in populations with moderate to high prevalence of H.pylori infection (ex: recent immigrants from developing countries, low socioeconomic status) and then PPI strategy are preferable in low prevalence situations.

In populations where the prevalence of ulcer or H. pylori infection is low, an alternative strategy is to first prescribe a course of therapy for 4-8 weeks. If the patient fails to respond or relapses rapidly then the patient would be referred for an upper endoscopy. If initial acid suppression fails after 2-4 weeks, it is reasonable to step up therapy, although this is based on expert opinion only, this may require changing drug class or dosing. In patients who do respond to initial therapy, it is recommended that treatment be stopped after 4-8 weeks and if symptoms recur, another course of the same treatment is justified. There is no data on long-term effectiveness of self-directed therapy for this condition, although this may be worth considering in some patients.

Physicians must determine when to treat and when to arrange endoscopy for patients. Patients at high risk for malignancy should have early endoscopy, in young patients without alarm symptoms, the initial management strategy appears to be H.pylori testing, followed by eradication of the organism when the test is positive. If symptoms resolve, no further treatment is necessary.

The gastric acid suppressant agent can be used in patients with dyspepsia who do not have H.pylori infection. If symptoms still do not improve endoscopy is indicated.

If after endoscopy, symptoms do not respond to all previous treatments, dietary, environmental and emotional triggers should be evaluated and addressed. Additional treatments can include antidepressant drug therapy, stress management or psychotherapy.

In conclusion, dyspepsia is a common problem that has a large number of possible etiologies. Most commonly, it is caused by gastric ulcers or Gerd, although malignancies and other serious conditions also need to be considered. Because symptoms alone are not useful in distinguishing between causes, the medical history, physical examination and laboratory review are all essential for proper diagnosis.

The chart below illustrates the management of dyspepsia. 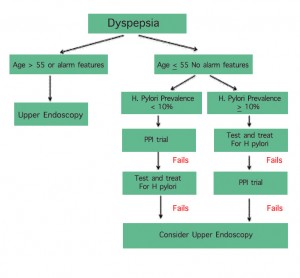