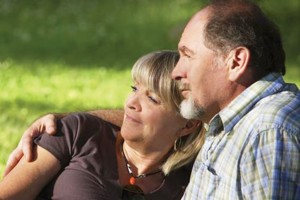 The month of July is a reminder for “Alzheimer’s Awareness,” which formally begins in the month of November as designated by President Ronald Reagan in 1983. Alzheimer’s disease is a quandary still not fully understood, even by the so-called “experts.” One thing for sure; it is an insidious disease not only affecting the afflicted, but everyone around them as well.

According to recent case studies led by Dr. Frank Lin, M.D., PhD, of John’s Hopkins Medical University and The National Institute on Aging, individuals with hearing loss are at risk to develop dementia and Alzheimer’s disease. Hearing loss is one reason for low involvement in leisure and social activities, as well as for a sedentary lifestyle, paranoia, sadness and depression, emotional turmoil and insecurity.

Alarming Statistics Concerning Hearing Loss and Marriage:
• Almost half of the people said that relationships with their partner, family, or friends had suffered because they cannot hear properly.
• Two-thirds said their hearing loss seriously hampers their ability to join in everyday conversations with family and friends, causing over half of those surveyed to feel left out and ignored in social situations.
• Approximately three-quarters of women surveyed were found to be more affected by social exclusion because of hearing loss than men.
• A third have lost touch with friends, and in some cases seen marriages fall apart, as a direct result of the breakdown in communication caused by hearing impairment.
• Almost all of those that responded said that losing their hearing is the worst thing about growing old.
• More than half feel their spouse is hesitant to get a hearing exam, and believe that denial is the main reason. The “I can hear just fine” argument can only go so far when it is obvious that you have to strain to hear a conversation. Denial is a powerful deterrent, and you should never give in to it, especially when your health and well-being are concerned.
• Two-thirds of respondents said “they felt annoyed” when their significant other cannot hear them.
• However, about half the individuals indicated they don’t appear to hear chore requests, although 78% are sure their hard-of-hearing partner can hear them fix a snack just fine!

Hearing Loss Linked to Dementia
and Alzheimer’s
Dr. Lin concluded that those with severe hearing impairment were five times as likely to suffer from dementia and Alzheimer’s disease. Even individuals with only mild losses were twice as likely to contract the disease; that includes those with only a twenty-five decibel hearing loss; and with every ten decibels of more loss, the risk increased by twenty percent. This is due to the portion of the brain that interprets speech is deprived of “proper” stimulation, causing atrophy and loss of function.

Those are among the major findings of a new study geared toward addressing potential solutions to the ever increasing problem of dementia and Alzheimer’s disease, which is estimated to afflict one hundred million people worldwide by the year 2050.

The Better Hearing Institute recommends annual hearing evaluations for people fifty-five years of age or older, just like annual vision exams. However, if you or someone you know suspects there might be an issue, schedule a hearing exam as soon as possible.

Warning Signs of Hearing Loss
Warning signs include: asking questions, statements, or directions to be repeated; hear people speak, but have difficulty understanding the words; have others raise their voice or move closer to help them hear; concentrate so much to listen that you tire from it; avoid certain situations because of difficulty hearing and understanding; hear some people better than others; have difficulty understanding conversations in the car; been told by others that you speak loudly; find it difficult to hear in noisy places; noticing that other people seem to mumble; missed the ringing of the telephone or turning the T.V. up louder than normal.

Benefits of Treating Hearing Loss
Conversely, those individuals whose hearing loss is treated report benefits that include:
•    Better relationships with their family and friends
•    More intimacy with loved ones
•    Added comfort in social situations
•    Less stress and anxiety
•    Greater independence and security
•    Improved mental health
•    Better feelings about themselves
•    Less dependency on others
•    Sense of safety and well-being
•    Willingness to participate in group activities
•    Ability to participate in card or board games
•    Better quality of life overall

Early Detection is Vital
Because of the potentially negative consequences of untreated hearing loss on a person’s quality of life Perhaps you think the cost of hearing instruments ranging from $1,000 – $3,500 per ear is prohibitive? However, if you calculate the initial price of the hearing devices over the three to five years an average device lasts, you come up with a totally affordable cost of about $3.00 per day. (But can you really put a price on improved quality of life?)

Advanced Digital Hearing Devices
Offer Best Treatment
The best way to treat hearing loss is hearing instruments. With the wide variety of many technologically advanced digital hearing devices currently on the market, and new ones being developed all the time, there is no excuse not to get examined and fitted.

Share
Previous Are Your Food Cravings Wrecking Your Diet?
Next Fatty Liver